In Hermann Kaufmann, Zell am See 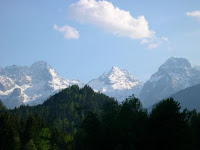 Finola and I have just spent a very enjoyable winter holiday in Zell am See in Austria. It was the first time we had ever been on holiday in the Alps in the winter.
The scenery is breathtaking, especially from the top of the Scmittenhohe mountain.
I met the mayor( Burgomeister) of Zell am See, Hermann Kaufmann. His Town Hall was built in 1531
He is directly elected by the people and is a full time public representative and administrator. He has to work with an elected council, who are elected separately from him, and sometimes can be of a different party majority.
There are about 9000 people in the municipality, but it is responsible for a wide range of local services, including the provision of a hospital , school building , public housing and water and sewage services for a tourist population that is often much bigger than the resident population.
Hermann Kaufmann belongs to the OVP party, which is part of the European People Party and thus is allied with my own party, Fine Gael. He is the first OVP Burgomeister of Zell am See for many years. This is a tribute to his popularity and effectiveness.
Until he came along the office was almost always held by a Social Democrat, who are now the second biggest party on the town council after the OVP. The Greens have one seat, and the Freedom Party, a party combining secularist liberals and extreme nationalists, hold one seat too. The fact that such a diverse group could belong to one party is one of the peculiarities of Austrian politics.
Zell am See is in a part of the former Archbishopric of Salzburg, which did not become part of Austria proper until 1806. Previously its secular ruler was the Archbishop himself, although the Archbishop was often a member of the Habsburg Imperial family, which ruled in Austria proper.
Zell am See is a great place to visit in winter and summer. We met many tourists there from all over Europe, especially from Ireland and from Russia.
Print Entry