WILL THE 1998 BELFAST AGREEMENT SURVIVE THE  UK GENERAL ELECTION OF 2020? 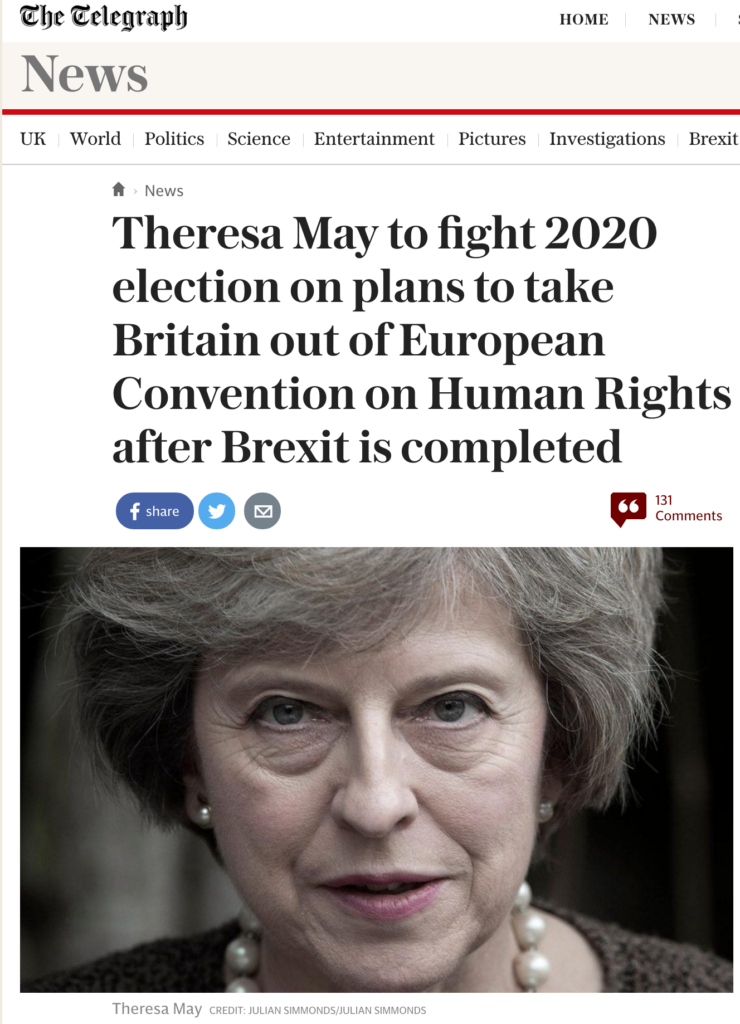 The Daily Telegraph today says that the UK Prime Minister intends to include in the 2020 Conservative Party General Election Manifesto a promise to pull the UK, including presumably Northern Ireland, out of the European Convention on Human Rights (ECHR).

According to the story, she does not intend to implement this promise until after the UK has left the EU, which she hopes to have achieved before the 2020 Election.

The existing corpus of ECHR law would apparently be incorporated into UK law, but there would no longer be a right of appeal to the European Court on Human Rights, only to the UK Supreme Court.

There is no mention of the inter relationship of the ECHR and the Belfast Agreement, or of any negotiation on it with the parties to the Belfast Agreement, anywhere in the Daily Telegraph article. Yet the  appears to be the result of a very detailed briefing. A purely unilateral UK action seems to be what is envisaged, without reference to the parties, including Ireland.

Adherence to the European Convention by the Northern Ireland Administration, and therefore by the UK unless Northern Ireland’s status changes,  is built explicitly into the terms of the Belfast Agreement.

Paragraphs 5(b) and 5(c) of Strand One of the Agreement require all legislation passed by the Northern Ireland Assembly to adhere to the terms of the ECHR.

There are other references to the ECHR in other parts of the Agreement.

The ECHR is fundamental to all the human rights elements of the Belfast Agreement.

It is important to the sustainability of any international agreement, in this case one between Ireland and the UK, that there be a neutral referee in the case of disputes.

This neutral element was particularly important to nationalist opinion at the time of the finalisation of Agreement, and the referenda which approved it. It remains so to this day.

As far as any disputes might arise about human rights in Northern Ireland, that neutral referee is the European Court of Human Rights. But the UK Prime Minister now apparently intends unilaterally to withdraw Northern Ireland from the ECHR and its court.

I believe this is a very serious issue, and bodes ill for the future.

As a former Home Secretary, the current UK Prime Minister should be aware of the constitutional importance of the Belfast Agreement, and indeed of the referendums approving it, in both parts of Ireland, which ended an historic dispute, dating back a very long time indeed.

We can only ensure that we do not “return to the border of the past” if there is an appreciation at the highest level that party driven initiatives do not undermine hard won negotiated achievements.