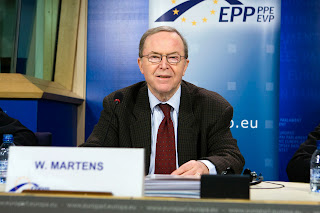 I was really sorry when I heard of the death of my friend, Wilfried Martens. I extend sympathy to his wife, Miet, and to his children.
Wilfried was the longest serving Prime Minister of Belgium. He was master of creative compromise, immensely patient but with a clear and unshakeable value system.
I worked with him over a period of 14 years in the bureau of the European Peoples Party. He brought the skills he had honed in Belgian politics to the service of the European Union and won the confidence of people of widely differing linguistic, cultural and political backgrounds  in the service of a great cause.
He will be missed, and very hard to replace.
Tribute by John Bruton, vice President of Fine Gael, and former Taoiseach of Ireland.
Print Entry