WHEN THE MONEY RUNS OUT……The end of Western Affluence.

In Stephen D. King, WHEN THE MONEY RUNS OUT 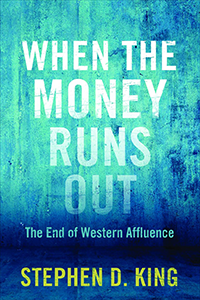 That is the title of the latest book by Stephen D King, Group Chief Economist with HSBC, which I read  last week.
King is a strong critic of his own profession of economics, believing it over emphasises the insights one can derive from mathematical models, and underestimates those one can derive from a study of economic history.
As in his previous book “Losing Control….the emerging threat to Western prosperity”, he draws heavily on illustrations from economic history, which in themselves are interesting and entertaining, even apart from their current relevance.
The earlier book showed that western prosperity is, in terms of human history, very recent.
It occurred because, for about 150 years, western nations could rig the rules of the game in their favour, either through
It is all over now. That dominance was already fading long before the financial crisis of 2008, and will not return.
The western growth rates of the 1950 to 1973 period are not repeatable.
China’s rise is simply a return to a relative position vis a vis the west, that it enjoyed for 1000 years up to 1800.
He also criticises many economists for forgetting that physical resources in the world are scarce, and, as the population, prosperous enough place those demands on those resources, grows, the  cost of those resources to purchasers in the west will rise.
It is against this background, that he disagrees with those who argue that economic problems can be solved by either
Neither of these methods will bring back  the exceptional late twentieth century  growth rates, on the basis  of which  western governments made unaffordable long term promises of health care, pensions, and the like.
All such initiatives  can do is slow down, and also prolong, the difficult adjustment process towards a lower growth rate.
Neither governments, nor central banks, will persuade consumers to start spending again, if consumers do not believe such stimulus policies can be sustained in the medium term. As long as consumers remain worried about their own future, they will prefer to save, rather than spend.
Most Governments cannot borrow more for a sustained period to stimulate the economy, because their existing debts and pension promises are already incredibly high. Consumers know this, and it is this lack of credibility such “stimulus” that destroys consumer confidence, and makes people save rather than spend, no matter how much a government borrows and spends in the short term .
Consumers are simply not as gullible as some Keynesian economist might like them to be.
Meanwhile the central banks’ policies of low interest rates, which incidentally were one of the causes of the financial bubble in the first place, are not a credible way out of the financial bust.
This is because   many consumers now depend, for their eventual pension, on private pension funds. Artificially low interest rates decimate the income of private pension funds. Consumers, who are worried about whether they will have a pension when they retire, will tend to save more, rather than borrow more , no matter how low interest rates are kept.
King says the shortfall in UK private pension funds is £312 billion, apart from government pensions for which there is no backing fund at all.
Unfortunately, public discussion in the media rarely makes the connection between pension fund deficits, and artificially low interest rates, supposedly designed to “stimulate” the economy.
Instead, the SAME people often blame the central bank for not making interest rates even lower, and  the pension fund managers, for not having returns high enough to meet pension obligations.
Quantitative easing, and the Liquidity Coverage ratios under the Basel III rules, give preference to the issuance of debt by governments. They help indebted governments find a market for their bonds.
But this is at the expense of bonds issued by business sector, which do not benefit from these rules, and have to have a higher interest rate. This damages investment, in favour of artificially prolonging unviable government entitlement programmes. How long can this distortion last?
King  believes that income inequality adds to the tension in society, which tends to increase anyway when the cake is not growing, and when  people can only get more, if other people get less.  How is it that Japan has much lower levels of income inequality than the US, the UK, or Ireland?
Economic stagnation also leads to a search for scapegoats. Anti Semitism grew up in Germany during the 1873 to 1879 depression, which also led to anti Chinese feeling in America.
But King offers relatively few ideas for remedying the situation.
Indeed one feels that he believes that we will simply have to accept lower living standards, and share out the sacrifices as equitably as we can, while preserving sufficient economic freedom to ensure that innovation continues.
He does argue that government expenditure that favours the young, should be spared from cuts. He favours temporary regional fund transfers within the EU to ease the plight of countries in crisis, because others foolishly lent them too much money.
This entertaining and honest book, by an economist, demonstrates the limitations of economics itself.
Economics, unlike medical, chemical, engineering, or agricultural science, does not produce new wealth.
It simply helps us to analyse what has already happened, after the event!
Print Entry

The Birth of the Nazis