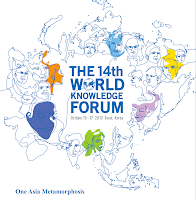 …….SOME POSITIVE INSIGHTS FROM IRELAND

I was in the Korea this week speaking at the World Knowledge Forum.
This year the theme of the Forum this year was promoting creative societies and cities.
Creativity is difficult to define. It is an ability to make connections that are not obvious, and to see problems from a different and new angle. It is not confined to money making or the economy, but can be applied to social problems, like the ageing of societies, and urban loneliness.
TRANSITION YEAR
I spoke about initiatives in Ireland to promote creativity. I highlighted the Transition Year which enables 15 year olds to step off the academic, and exam driven, treadmill for a year and develop skills and interests of their own choosing, with the guidance of their teachers.
During Transition Year students can try new or experimental subjects, do project work, do work experience or community service and become more adaptable and well rounded people. Transition Year was introduced by the then Minister for Education, Dick Burke, in 1974 and has grown in coverage since.
Research has shown that students who do the Transition Year (about 50% of the total population,) do markedly better in their final exams two years later than those who do not do so.  I believe it made a lasting contribution to Ireland’s economic development and that Dick Burke does not get enough credit for it.
CURRICULUM REFORM,   HELP FOR START UPS
I also dealt with new Irish initiatives in early childhood education, and the reform of the second level curriculum.
Another Irish contribution to creative development is the Digital Hub in Dublin, and the funds that have been set up to promote new business start ups. Information and communications technologies has enabled start up ventures to enter the global market place, much more easily and quickly, than was possible even three years ago.
Ireland aims to be one of the world leaders in business start ups and has achieved great success in service exports in field like software, computer games and financial services.
Also speaking at the Forum in Korea were leading economists Larry Summers, Tyler Cowen, Herman Simon, and Greg Mankiw, and I will return to some of the interesting things they said in future posts. I met the former Prime Minister of Israel, Ehud Barak and the former Mayor of Los Angeles, Antonio Villaraigosa at the Forum.
Print Entry