What is going to happen to Europe’s economy? 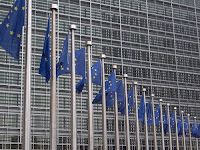 President van Rompuy of the European Council is convening a meeting of the Council next month to look at how best to revive Europe’s economy. It is a field he knows a great deal about.

It is likely that the dollar will continue to weaken relative to the euro. This will give US exporters an advantage over EU exporters in the markets where they compete with one another.

Looking to the longer term, an ongoing shift of wealth away from Europe and North America and in favour of Asia will continue for a generation, unless disrupted by some major political event. If this proves to be the case, there will be a growing disjuncture between the continuing overwhelming military power of the US ,and its declining relative economic power. Tougher prioritization of military spending by the US will become necessary, as health and pensions come to absorb more of available tax receipts.

The nations of the European Union and the United States both face a major problem arising from the ageing of their societies.

In the US case, this will take the form of burgeoning medical costs. Already 50% of all US health costs are incurred in respect of those over 55 years of age, and, as the share of the total population in that age group increases ,the gap between what Americans expect from healthcare, and what they are willing to pay for it through taxes and insurance premia, will grow. This gap is likely to be filled by adding to already large Federal and State deficits.

In the EU case, similar pressures will arise, particularly in the pension field where the unaffordability of some national pension systems will become very acute. The health systems of EU countries will also face ageing pressures.

An EU Commission study suggests that, if policies are not changed, the average debt/ GDP ratio of EU member states will reach 550% by 2060. This is similar to the figure that US Federal debt/GDP ratio could also reach, if current policies remain unchanged.

The ageing of societies will also have an adverse effect on productivity on both sides of the Atlantic. The skills of older workers skills are liable to higher rates of obsolescence than those of younger workers. Older workers are likely to be less willing to move house to find new work. Thanks to its one child policy, China, but not India, will eventually be subject to this problem too .

On the other hand, the ageing of society should help reduce unemployment among the young. There will be less people of working age than at present, but there will be no reduction in the amount of work to be done, particularly in areas like personal services (hairdressing, cooking, and cleaning). This is work that cannot be outsourced to other parts of the world. But these jobs will not pay well.

There will be increased tension between generations over the distribution of resources . Younger people will resent the amount of tax they will have to pay to fund healthcare and pensions for older retired people who are no longer working.

How well has the EU equipped itself , in its long gestated Lisbon Treaty, to deal with these challenges?

Given that the EU and the US will be facing similar challenges, and in many cases defending similar interests, are the mechanisms they have for promoting their joint interests in global negotiations fit for purpose?

These are the two questions to which I would now like to turn.

As far as general social and economic problems are concerned , the main responsibility rests with member states rather than the EU. It is the member states who retain the power to raise taxes and they control the vast bulk of public spending

The Lisbon Treaty has introduced additional area in which the Council of Ministers will vote by majority and this will enable the EU to react to problems more quickly in some areas. But these are not areas of direct relevance to the economy.

As for controlling public spending, the Lisbon Treaty has not resolved the problem of enforcing discipline within the euro area. As is known, in November 2003, two big countries got a free pass although their deficits were well above permitted limits under the then applicable Stability and Growth Pact. Now, in face of the economic crisis, almost all the euro countries will exceed these limits.

A more realistic discipline is needed, one which distinguishes between excess deficits that arise because of one off events or from factors that affect all economies, and deficits that arise from an enduring imbalance in a particular economy that must be addressed by that country if it is to remain a credible member of the euro. Now that the Lisbon Treaty is ratified, that problem will have to solved by a means that do not require a change in the Treaties. Hopefully the new version of the Stability and Growth Pact will prove to be more robust in practice than the old one was. But it is more likely that bond markets will be more effective than warnings from Brussels in forcing countries to bring their finances under control. Unfortunately bond markets often leave it to late to give their warnings, and then they overreact.

The EU will also have to develop a way of giving political guidance in respect of exchange rate policy. A radical devaluation of the dollar, sterling and other currencies against the euro would impose severe political strains within the eurozone, and it will not be impossible to ignore this. The arrangements for dealing with this are not altogether clear, although the subject is covered by Article 219 of the Lisbon Treaty.

A critically important area for the EU is energy policy. EU countries will go from importing 57% of their natural gas today, to having to import 84% by 2030. The corresponding figures for oil are even worse. And, unlike the US, the EU does not have vast reserves of coal. Thus the EU and/or individual EU member states are vulnerable to political blackmail by energy suppliers.

The trouble here is that it is the member states of the EU, not the EU itself, that has the legal and practical means of guaranteeing minimum supplies of energy to its own citizens. It is states, not the EU, that can impose rationing. It is states, not the EU, that own big energy utilities. And, while the EU as a whole is increasingly dependent on imports, not all states are equally so. Some have reserves of coal, and others have nuclear industries, often owned by their taxpayers. All these factors make it difficult to frame a common EU policy. The Lisbon Treaty does give the EU greater power to promote a single market in energy . But that will require huge investments in cross border pipelines and power lines. The Lisbon Treaty does not give the EU the power or the money to make that happen.

In these ,and other areas like creating a single market in services and opening up all Government purchases to cross border competition , there are real economic efficiency gains to be made. But the benefits gained will be diffuse and will be enjoyed by everybody in general but by nobody in particular. Consumers would benefit from such EU policies, but consumers are notoriously difficult to mobilize. The problem is that he EU has masses of policy, but very little mass politics. And without mass politics, it is hard to move forward on really difficult , politically sensitive, issues that benefit consumers rather than entrenched producer interests.

The Lisbon Treaty did not address this properly. To create mass politics at EU level, one needs to have EU wide elections that mobilize opinion across national boundaries . If the President of the Commission ,or the new President of the European Council, had to get their mandate directly from the EU electorate, there would be a much better chance of building the sort of mass politics at EU level that would move things forward. It is unrealistic to complain of lack of popular political will at EU level, if the means of creating it were not put in place.

Finally, how well equipped are the EU and the US to act together to defend their interests when these interests converge, as they often do? My answer to that question is “not very well”. There are lots of institutions and dialogues linking EU and US policy makers , but the policy making processes are so different on each side of the Atlantic that it is difficult to synchronise them.

My own feeling is that the priority of the EU should be to spend more time working out what its own needs are, and forging common positions on them between its 27 members. When it has first done that, it will find that the US will be more willing to listen to it.

Figuring out the USA