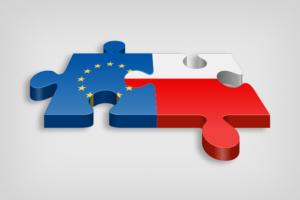 Brexit is not the only problem challenging the integrity of the EU’s single market.

In December the Venice Commission, a body set up by the Council of Europe (which is independent of the EU), said that elements of the reform of the judiciary being undertaken by the present Polish government

One of the authors of that report was the distinguished Irish barrister, Richard Barrett, who worked at one time in the Irish Attorney General’s office.

The EU is a system of rules and the EU can only survive if its rules are fairly and uniformly enforced by the courts of the 28 member states.

This issue lies at the heart of the difficulties the UK is experiencing, as it tries to leave the EU, still enjoy the benefits of the EU’s common market for goods, but without taking part in the common system for making, interpreting, and enforcing the rules of the common market.

In a very different way, this same issue is at the heart of the disputes, between the European Commission and the governments of Poland and Hungary, about the independence of their judicial systems.

If one is living or doing business in Poland, the only way one can get one’s Common Market rights is by going, in the first place to the Polish courts. This course should be open to you, whether you are a Polish citizen or not, and whatever political opinions, or status vis a vis the government of Poland.

The EU insists that courts be independent so that everyone can enforce their EU rights, as equal EU citizens, anywhere in the EU, at all times.

This rigorous insistence on the rule of law is one of the reasons many European countries want to join the EU, so that they can get the EU seal of approval for the rule of law in their county, and thus be attractive to overseas investors and other visitors.

I visited Serbia recently , and heard that country’s Prime Minister, Ana Brnabic, stress that accession to the EU was the number one priority for countries in her region. She said that the rule of law and transparent administration, demanded as preconditions for Serbian membership of the EU, are crucial to winning foreign investment and access to cheaper finance for Serbia.

So, if the Polish courts were to be allowed become politicized, and were perceived to no longer be objective in all circumstances in interpreting EU law, and Poland still tried to continue to enjoy all the privileges of EU membership, that would damage the EU as a whole, as well as Polish citizens. It would discourage investment in Poland. Worse still, it would remove part of the reason for the existence of the EU…the rule of law.

The European Commission started proceedings against Poland under article 7(1) of the EU Treaties over aspects of the restructuring of the Polish judiciary. It was on an application to it by the European Commission, that the ECJ ordered the Polish government to stop appointing a large number of new judges to its Supreme Court in recent weeks.  The ECJ feared the new appointments might politicize the Polish courts.

The Polish government is able to propose this large number of new appointments because it is compulsorily retiring up to 40% of existing judges, on the basis of newly introduced upper age limits.

The well founded fear is that it will replace these compulsorily retired judges, with judges sympathetic to the views of the present government. The age limit will not, indeed, be applied uniformly. The government will be able to grant discretionary extensions to some judges, presumably those whose judgments it likes.

This comes on top of a merger of the offices of the Minister for Justice and the Public Prosecutor. This merger creates a fear that prosecutorial decisions will also be politicized. The independence of the DPP’s office in Ireland was one of the important reforms made in Ireland in the 1970’s, and it has been carefully protected by successive Taoisigh since then.

The Polish “reforms” also provide that the President of the Republic, not the court itself, would establish the rules of procedure for the Polish Supreme Court, determining which categories of judge would hear what sort of case. Again this is unacceptable political interference.

In the Venice Commission’s report, co-authored by Richard Barrett from Ireland, the Commission concluded that the Polish government’s proposed mechanism for an extraordinary review(and possible reversal) of past judgments was

“dangerous to the stability of the Polish legal order”

and said it was “problematic”  that the mechanism is retroactive,  and allows the reopening of cases decided  before the proposed law was to be enacted. This is an understatement.

“pose a grave threat to judicial independence as a key element of the rule of law”.

It is very important for the EU that the Polish government realizes that it is not enough just to have free elections. A country cannot enjoy the benefits of EU membership, or of democracy, unless it respects the rule of law which is enshrined in Article 2 and Article 7 of the EU Treaties.

The credibility of the EU, and the integrity of the EU Single Market, is at stake in Commission ’s dispute with Poland, to an even greater extent than it is with the UK’s attempt to “have its cake and eat it” on trade!.