WHAT HAPPENS IF GREECE DEFAULTS? HOW DISHONEST “ANTI AUSTERITY“ RHETORIC MAY LEAD EUROPE TO AN AVOIDABLE DISASTER 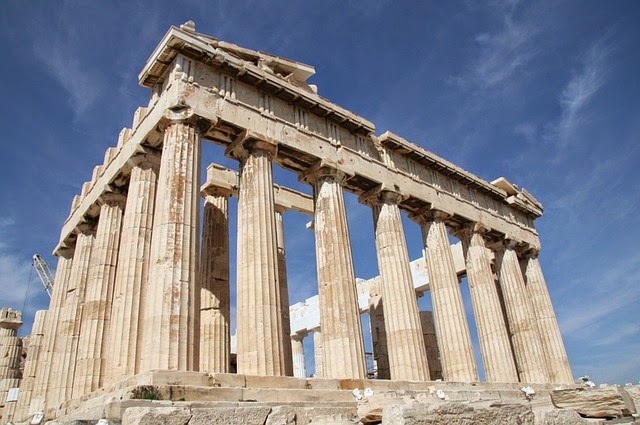 If Greece defaults on its debts, and leaves the euro, the effects will be very hard to calculate.
Nobody really knows what will happen. Nobody even wants to talk about it.
But a very serious precedent will have been established.
That precedent, that of a euro zone country defaulting on its debts and leaving the euro, will eventually place upward pressure on the interest rates charged to small euro zone countries with substantial debts. Financial markets are emotional and erratic and often fail to make distinctions that should be made.
The effect of a Greek default may not, of course, be felt immediately, thanks to quantitative easing, but the underlying precedent will tend to corrode of confidence in government bonds generally and confidence in the irreversibility of the euro, and confidence is the basis for all money.
Maintaining confidence, and doing what is just and rational in an abstract sense, are not always the same thing.
Just as in the private sector, a risk of not being repaid in full usually leads to a higher interest rate…a risk premium.
For example, if , for legal political or cultural reasons, banks  have difficulty getting hold of properties, given as security for loans that are no longer  being serviced by  borrowers,  they will tend to charge a higher interest rate on such loans. The gap between the rate of interest banks charge, and the rate they pay for funds, will be wider than it would be if they knew they could easily realise their security, if a borrower defaults.
The rules for capital adequacy of banks, set by global banking regulators, have treated government bonds held by banks as risk free, and this has meant that banks buy a lot of government debt. If, thanks to a Greek default, government bonds are no longer risk free, this will call these rules into question. That , in turn, would make government  borrowing more difficult.
The present Greek crisis was not inevitable. It is the result of a decision by Greek voters.
A few months back, it looked as if the Greek economy was about to start growing again, admittedly from a low base. For example, as recently as August 2014, Deutsche Bank forecast that the Greek GDP would grow by 2.2% this year. This was to be almost twice the forecast growth for the euro zone as a whole, and second only to the forecast growth for Ireland of 2.3%, which has proved to be a big underestimate in the Irish case.
Greece had put in place a lot of structural reforms, under the previous Greek government, more than almost any EU country by some measures. The labour market reforms improved the competitiveness of the Greek economy, but the full benefit of these reforms was not achieved because of cartels protecting some professions and services. The reform programme of the previous government was not a “failure”, but it was delivering results too slowly for an impatient electorate in Greece.
40% of loans in the Greek banking system were non performing, but the banks were not dealing with this. Greece was suffering a brain drain.
That prospect of 2.2% growth in the Greek economy was blown away by the uncertainty caused by the Syriza election victory, and the nationalistic rhetoric and grandstanding that surrounded it. This led to a flight of confidence, and money, from the Greek banking  system and an unwillingness of foreigners to invest in Greece as long as the political uncertainty persisted. It did nothing to slow the brain drain.
The new government threatened to undo the labour market reforms and to make it more difficult for Greek banks to deal with non performing loans.
The  structural reforms, put in place by the previous Greek government, had begun to work, when they were derailed by politics.
Syriza won office on a false platform which asserted that the previous structural reform programme had been a “failure”. It had not been a failure, it had  brought Greece to the pont where its forecast growth rates for this year were second best in the euro zone. It had simply taken longer to work than it would if international conditions were more favourable, and if it had been extended as vigorously to  the professions, and to tax evasion, as  it had been to employees.
Syriza  convinced Greek voters the “austerity” was a “failure”, without saying what those terms meant in practice, but implying instead that others should pay Greece’s debts for it, as part of some sort of moral obligation the rest of the world had to Greece. This was naive. Greeks forgot that other EU nations have electorates too!
If one is spending more than one is earning, “austerity” is inevitable, sooner or later, unless you can achieve a rate of economic growth that is faster than the growth in your state’s obligations. That was always going to be difficult for an ageing society like Greece, with an under funded  pension system, and a  disproportionate amount of early retirement.
The tragedy is that modern election campaigns have become shouting matches, that do not lend themselves to the sort of informed discussion that would have  led voters to see, in time, the fallacy of policies that imply that one can persistently consume more than one is earning, without eventually facing  “austerity”.
There is some ground for hope. A deal can be reached.  Because of the nature of  its support base, Syriza may have more freedom to tackle tax evasion and  cartels in the professions, than the previous government. This could get Greece back on a growth path, so long as  Syriza does not attempt  to reverse  the reforms  the previous government HAD put in place.
Print Entry

THE IRAN NUCLEAR DEAL……..AND OTHER MATTERS

DEATHS OF REFUGEES CROSSING TO EUROPE FROM AFRICA