WHAT DOES THE GOOD FRIDAY AGREEMENT REALLY MEAN?

HOW MIGHT THE CONSTITUTIONAL STATUS OF NORTHERN IRELAND BE CHANGED?

HAVE THOSE WHO CALL FOR IRISH UNITY REALLY THOUGHT ABOUT WHAT THEY MEAN? 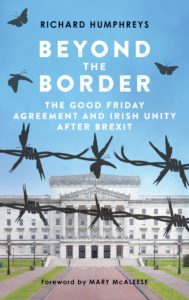 I have just finished reading “Beyond the Border….the Good Friday Agreement and Irish Unity after Brexit” by Richard Humphreys. Richard Humphreys is an Irish High Court Judge and was a legal advisor to the FG/Labour/DL government.

The book explores the meaning if the Good Friday Agreement. It explains that its terms will still apply after Brexit, and would still apply, even if Northern Ireland ceased to be part of the UK and joined a united Ireland.

The Agreement’s requirements mean that the Stormont institutions, its protections for minority interests, and its requirement of respect for both identities would continue after unity.

The author favours Irish unity, but acknowledges that there will be a continuing UK interest in Ireland even if this happens.

He presumes there would be support for unity in the Republic. In this, he relies on Article 3.1 of the Irish constitution which states this to be the “firm will” of the Irish people, if consent has also been obtained in Northern Ireland.

He argues that a 50% +1 vote majority, in a poll in Northern Ireland, is sufficient to bring this about. Legally, this may be so, but that is hardly enough.

It is really surprising that the Brexit experience, of setting out on a major constitutional change, on the strength of a narrow majority in a referendum, has not prompted some rethinking on the author’s part.

He does not explore the extra taxation that might have to be paid by the southern taxpayer to replace the current UK subsidy to Northern Ireland, in the event that sovereignty moved from Westminster to Dublin.

Nor does he even mention the potential extra security provisions that would be made by the Irish taxpayer, to enforce Irish unity of any kind in places like Ballymena, East Belfast and Portadown (unless, of course, the locals wanted it). After all, effective democratic government requires more than just the will of the majority, it also needs, at least the passive, assent of the minority.

Faced with these realities, the “firm will” for unity in the Republic might not be so firm after all.

These omissions expose the limitations of a purely legalistic approach

Judge Humphreys deals with the things an Irish government would have to do to recognise the “British identity” of Unionists within Ireland.

He argues that these things should be done, in any event, and long in advance of any border poll, and not used as a bargaining counter in negotiations with unionists.

He suggests, for example, reactivating Irish membership of the Commonwealth.

He points out that, under the Good Friday Agreement in the event of unity, Unionists should be able to retain UK citizenship while also being able to avail of all the rights of Irish citizenship.

My own sense is that active East/ West cooperation on joint projects with Britain would be a big help to mitigate a Unionist sense of isolation, whether or not Irish unity is being contemplated.

In that sense the reactivation of the British/ Irish Intergovernmental Conference this week is an important step, especially as Brexit is otherwise going to wider the gulf between us substantially, hard border or not. Ireland and Britain need to think creatively about things we can do together, post Brexit.

One also has to ask whether the fact that the Irish constitution designates the Irish language, as the first official language, and the priority language for constitutional interpretation, is a provision that accord parity of esteem to the Unionist identity.

Irish nationalists have been successful in insisting that the upholding of the Good Friday Agreement be a central part of the EU negotiating position in the Brexit negotiations.

Are nationalist politicians in Northern Ireland are showing a similar commitment to operating their own part of the Agreement?

It is worth remembering what all parties are committed to. The Agreement says

“ We pledge that we will, in good faith, work to ensure the success of each and every one of the arrangements to be established under this agreement”

Given the difficulties there were in agreeing a budget for Northern Ireland, and given the collapsing of the Executive because of disagreements about the Irish language and Ulster Scots, one has to question the commitment of both Sinn Fein and the DUP to the Agreement and their respect for their pledge.

This is a serious book, and will prompt readers to examine their preconceptions about a topic that will be with us for years to come.

IMMIGRATION FROM AFRICA IS INEVITABLE….