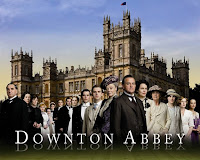 Like many others on both sides of the Atlantic, I been following the television series, ”Downton Abbey”.
It is a fascinating fictional story, well told and well acted. It is full of human interest, and you can feel for the characters, almost as if they were real people you knew.
One might wonder how historically authentic it is.
I have recently   read “Black Diamonds, the rise and fall of an English Dynasty” by Catherine Bailey (published by Penguin Books), which helps answer that question, because it is based on a real family, and a real house, and covers the same period, from the  1870s up to the 1950’s.
It tells the story of Wentworth house, a stately home in Yorkshire, and the family who lived there, the Fitzwilliam family. 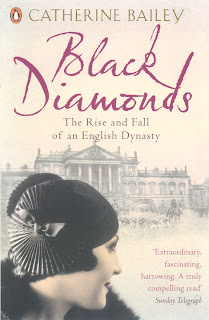 Sir Thomas Wentworth, King Charles the first’s seventeenth century Lord Deputy in Ireland was one of the family, as was Earl Fitzwilliam, who was a progressive Lord Lieutenant of Ireland in the 1790s. The family owned a large property in County Wicklow at Coolattin.
Wentworth House was the biggest house in England.  It was built on the strength of vast coal wealth, much of which was literally underneath the house.
While the family were already very well off before large scale coal mining became commercially viable, they became super rich once it did. In the 1870’s, the UK produced half the world’s coal, and this sustained a huge increase in the wealth of those lucky members of English landed aristocracy who owned the coal.
But, by the 1920’s, Britain  was only producing one fifth of the world’s coal and was having to compete with low priced German coal which was  flooding the market to enable Germany to pay off war reparations under the terms of the Versailles Treaty.
Miners wages were reduced to regain market share. The Fitzwilliam family were good employers, unlike many coal owners, and went so far as to provide support for their own employees’ families, whose breadwinners had withdrawn their labour during the General Strike of 1926.
This gesture is remarkable because the General Strike had been launched to back a trade’s union demand for the nationalisation of the coal mines. Nationalisation was eventually implemented by the post war Labour Government, who undertook open cast mining in the immediate vicinity of Wentworth House, in what was seen by many locals as a form of class vengeance.
Unlike the Downton Abbey television drama, this book gives a good insight into the very tough living and working conditions of the coal mining families, whose labour was essential to sustain the gracious lifestyle of the residents of the big house.
But the personal dramas of the Fitzwilliam family are more extravagant than anything in Downton Abbey, all the more interesting for the fact that they are actually true.
There were legal disputes about the legitimacy of one   heir to the title, and an affair between another and the widowed sister of the late President John Kennedy.
It is an entertaining book, and a good mixture of human drama and historical insight.
Print Entry

WHAT WOULD HAPPEN IF THE EU BROKE UP?