US State Legislators come to town 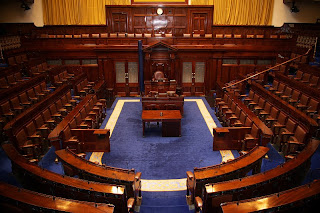 I was delighted to be invited to speak to a very distinguished  group  of members of American  state legislatures , who came  on a  four day study visit to Dublin this week, to  study the future of the European Union and of  our currency, the euro. They were also addressed by the former President of the Bundesbank, Ernst Weltke, and by the noted economist, John FitzGerald.
The event took place in the Chamber of the Dail itself, a place where I worked as a member for 35 years.
I was delighted to meet the former speaker of the Rhode Island House, Bill Murphy, who met me when I addressed his legislature as EU Ambassador. I also met the majority leader of the Connecticut House, Martin Looney, whose grandfather was once a member of Clare County Council.  Maryland, Indiana, Tennessee, Alabama, Hawaii, Utah, Kansas, New Hampshire, Georgia, Pennsylvania, Arkansas and Indiana were also represented at a very senior level.
Among the   Irish politicians to take part in the discussion were Lucinda Creighton TD, Bernard Durkan TD, and Senators Phil Prendergast, Donie Cassidy, Eugene Regan, and Terry Leyden. They represented all three main parties.
It was an important opportunity to explain the uniqueness of the European Union to a key group of American decision makers.
I stressed the EU is a voluntary Union, states stay in it without any form of compulsion.
It is a structure of peace in Europe, in that it unites, in interdependence and pooled sovereignty, 27 very different countries many of whom were previously were at war with one another  at different times in recent history.
Whereas most modern states came into being through the use of force, the European Union came into being entirely peacefully and without any form of coercion at all.
Print Entry