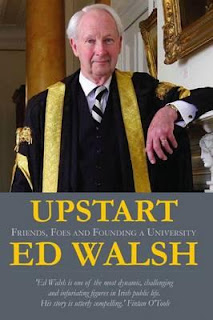 The title sums up this book well. The foes seem to get more attention than the friends, in this entertaining account of the authors struggle to set up the University of Limerick.At the age of only 30, as a young Ph D from the University of Iowa, Ed Walsh returned to Ireland to set up the proposed institute of higher education in Limerick. He had been previously excluded from consideration for a professorship in UCG in favour of an internal candidate, because he was not considered sufficiently proficient at teaching neutron physics, through Irish.  The fact that  in  1969  the Department of Education entrusted the  setting up what was to become eventually  the first new university of an independent state ,  to someone, who himself was  barely out of college, is sign of the occasional  adventurousness of Irish officialdom at that time. It is necessary to say that, because the book is otherwise full of tales of bureaucratic obstruction. Ed Walsh is a native of Sundays Well in Cork, and his father was a successful butcher. He accompanied his father to fairs to buy cattle, and recalls the soon to be forgotten ritual of the fair day. His mother’s family were from Kanturk, and her mother came to live with the authors parents shortly after they married. This difficult dynamic of this situation is well described, and young Ed does not appear to have been a particular fan of his grandmother! He studied engineering in UCC before going to the University of Iowa, where he absorbed many innovative ideas about the organisation of higher education. He married Stephanie Barrett, the daughter of the late Stephen Barrett TD, in 1966.His early struggle to get a building and to  recruit staff for the new institute in Limerick involved getting sanction for every individual move from the Department of Education. It also required occasional interactions with local politicians, including being offered poitin at the hospital bedside of the late Stevie Coughlan TD, who had apparently been hospitalised to dry out. Both Stevie, and his son Thady, were very effective supporters of the institute at crucial times.In recruiting staff for the new institute, he decided to look abroad, and gave no preference to existing Irish academics, something he feels caused enduring resentment. He pioneered a modular system and the incorporation of work experience into courses. This required a lot of contact with businesses by academic staff, which improved the relevance of their teaching, and thereby helped the institute to achieve one of the best employment rates among its graduates of any Irish third level institution.He also broke with then academic practice by insisting that the deans, who would head up the various faculties, would be selected by him, rather than elected by colleagues. This meant that the people chosen, put students and the overall needs of the institution first, rather than prioritizing  those on whom they had relied to get their job. When Limerick eventually achieved University status, he had to work very hard to maintain this system, because a coalition of union and party political interests on his governing body felt that being a university meant that one was now entitled to adopt some of the bad practices of existing universities.He is scathing about the protectionist attitudes built up around the Irish language, and in particular the insistence of many officials of the Department of Education on using the Irish version of their name.  As he put is, decent men, known to their families as Paddy or Kevin, entered a kind of unholy priesthood once they passed through the gates of Marlborough Street, becoming Padraig or Caomhin, and learning to drop the occasional phrase in Irish into conversation, to give signals that only the inner circle could decipher.The final push to get, for Limerick, University status, and the right to award its own degrees, seems to have been a bitter struggle.  Existing universities felt that the government was not allocating enough to higher education as it was, and that another new university would further dilute what was available.  Ed Walsh believes his own alma mater, UCC, played a particularly hostile game, which he describes in detail. In later years, Ed Walsh’s notable success has been as a fundraiser  for  his University. Chuck Feeney and Atlantic Philantrophies have been particularly generous. Donors rightly insisted on supporting “extras”, rather than basics. But this sometimes had odd results, like the University having a state of the art concert hall, before it had a state of the art library.  Gemma Hussey, as Minister for Education, appointed Ed Walsh as chairman of the Curriculum and Examinations Board.  This body was charged with modernising Irish first and second level education. In view of Ireland’s  dramatic   decline in comparative standards in  mathematics and reading, highlighted in the latest OECD report on the  Irish economy, it is disappointing that the book does not  deal with this experience at all. It would be interesting to know if vested interests, who the author so successfully defeated in Limerick, got the better of him in this equally important field. I was put off initially when I took up this book, because it is laid out as a diary rather than a conventional narrative.  But once one gets into it, it is a good read.  Some of the comments on those who did not agree with what the author wanted, are acid. I expect anyone who has had anything to do with the administration of higher education in the last forty years will be consulting the index to see if they get a mention!
Print Entry

AND NOW A REFERENDUM IN GREECE!