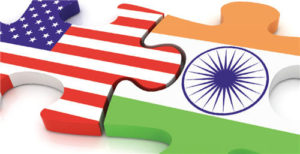 I visited India in the past week on business.

India is the largest democracy in the world.

The United States is the second largest.

Politics is robust in both countries, but in India the mood is one of increasing openness towards the rest of the world, whereas that in the United States is in favour of building walls.

India is a good vantage point from which to contemplate the moral content of the anti globalisation rhetoric of Donald Trump, Bernie Sanders and their followers.

Given that the United States is one of the richest and best endowed countries in the world, “America First” seems to me to be a particularly selfish motto for a great country. Yet it is espoused by left wing anti trade Democrats, just as much as it is by the new President

Looking at this from the standpoint of India, one realises that it is thanks in part to globalisation, to  the opening of markets, and to the transfer of western technology to the country, that in India

India is urbanising rapidly. It is estimated that another 250 million people will arrive in India’s overcrowded cities in the next 20 years.

8 million young people enter the Indian workforce every year, many in rural areas where few job opportunities exist outside agriculture. In fact only 16% of India’s existing workforce is in waged employment.

The opportunities to invest in the development of India’s infrastructure are enormous. Sanitary services and road building are seriously deficient. Air pollution and unsanitary living conditions continue to damage the health of many Indians.

Europe needs to work with India to protect the open global economy, while enabling states to put in place robust taxation systems that can distribute the fruits of  globalisation fairly.