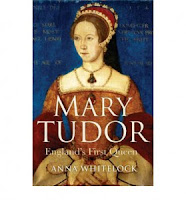 I have just read two good books on Europe’s history during the Renaissance and the Reformation.

One was “The Medici, Godfathers of the Renaissance” by Paul Strathern, and the other was “Mary Tudor, England

Both books show how events in one part of Europe influenced other events thousands of miles away, and how religious developments were influenced by political ones.

The Medici family made their fortune as bankers, and first went into politics to protect their banking interests, in Florence but later in Rome, where one of them, Giovanni, became Pope Leo X and another, Giulio, became Pope Clement VII.

It was Pope Leo X who awarded Mary Tudor’s father, King Henry VIII, the title Defender of the Faith, which still appears on all British coins.

But it was the other Medici Pope, Clement VII, who refused Henry VIII’s request to have his marriage to Mary Tudor’s mother declared invalid. This led to Henry denying the Pope’s authority on religious questions, and taking that authority himself an event has repercussions right down to the present day.

Mary Tudor was King Henry VIII’s eldest daughter by his first wife, Catherine of Aragon. When Henry declared his marriage to Mary’s mother Catherine to be invalid and said that he, as Head of State, and not the Pope, would determine religious policy in England, Mary refused to accept it.

She was placed under house arrest. She also refused to give up attending Mass, which put her life at risk. Many others were put to death by Henry for thi

s. He declared her to be a bastard to back up his claim that his marriage to her mother had been invalid. He also said she was not entitled to succeed to the throne, a decision he later reversed.

When Mary’s brother Edward VI died, the key courtiers in London tried to have her cousin, Jane Gray made Queen. But Mary led a popular revolt, faced the courtiers down, and became Queen by popular and parliamentary acclaim.

Being the first ever woman to rule in her own right, she had to overcome prejudice. She was decisive in times of crisis, was attentive to the details of administration, and made good use of her knowledge of a number of foreign languages. She was also popular, something little referred to by historians

She sought to bring the Church of England back into obedience to the Catholic Church and to reverse her father’s breach with Rome. She very nearly succeeded in this. Her methods were sometimes very harsh, but so also were those of her opponents and successors.

She was deeply religious, which may explain the fact that, although she was England’s first woman ruler in her own right and thus broke one of the biggest glass ceilings of all, she is not much recognised by modern feminists.

Royal families had no scruples about marrying close relatives if it secured a political gain.

Mary was in her early thirties when she married her cousin, who was soon to become King Philip the second of Spain, and who was then in his early twenties.

She was more in love with him than he was with her. Crucially she did not manage to have a son or daughter by him. He visited her only twice in England, but still succeeded in drawing England into a war with France, which served his , but not her interests. Mary died at the very young age of 42 and her religious policies were to be reversed by her successor, Elizabeth I.

mily initially became the rulers of Florence, as political bosses controlling all the key appointments, rather than as formal rulers of the city in their own right. They were not popular with everybody, despite their generous patronage of the arts and of festivities. In their time, Florence was the centre of the scientific and artistic world. Michelangelo, Leonardo da Vinci , Galileo and Botticelli were all helped to develop by the patronage of the Medici family, who took a deep interest in their work. 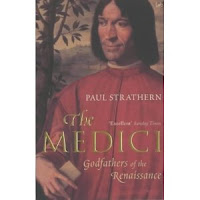 Paul Strathern’s book gives a good account of Italian politics in the 15th and 16th centuries, and describes the rivalries between Florence, Milan and Venice and the competing attempts to gain the upper hand in the peninsula by France and the German Emperor. The papacy was in the middle of all this, seeking to defend its own territories and tipping the balance in one direction or the other, and the balance between these conflicting powers played a big role in deciding who became Pope at a given time.

France and the Emperor were also seeking to get the upper hand in English affairs during Mary Tudors lifetime, and she was initially offered in marriage to a French prince , but finally married the son of the Emperor.