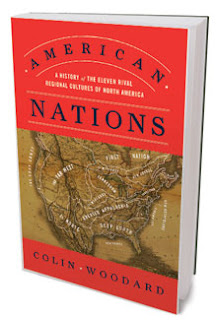 One of the most original books I read in the last year was “American Nations, a history of the eleven rival regional cultures of North America” by Colin Woodard, a journalist living in Maine.
The thesis of the book is that  the first European settlers in a given part of the continent established the  prevailing  cultural and political norms for the  area and that subsequent immigrants, even those with  very  different ethnic and religious backgrounds,  adopted the  norms of the  original settlers. Although the original settlers may have arrived 400 years ago in different parts of  North America, their norms  can, Woodard argues, be seen in the  voting patterns of different  parts of North America to the present  day.
During my  five years as an Ambassador in the United States, I  spent a lot of time studying the  voting patterns of  different states and reading American history, and I have to say I find Woodard’s thesis to be fully borne out by my own observations.
Among the eleven “nations” he identifies are
an internationalist one around New York city, which still has the internationalist bias of its original Dutch settlers,
a Yankee nation in New England and a northern belt going west to Chicago, which is influenced by the Puritan and statist ideas of the original settlers of New England
an Appalachian culture which is deeply suspicious of all authority in church or state
a culture of the  Deep South influenced by slavery and its resultant  class  distinction
an Hispanic culture that  straddles the US /Mexican border
Power in the United States is influenced by the shifting of the alliances between these  different “nations”. 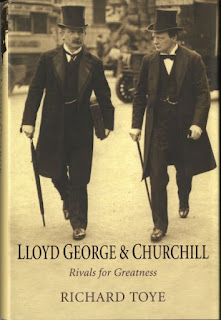 Another very interesting book I have just completed is “Lloyd George and Churchill, Rivals for Greatness” by Richard Toye.
Churchill and Lloyd George were both Ministers in the last single party Liberal Government to hold office in Britain. It held office from 1906 until it split, and was overthrown, in favour of a National Government headed by Lloyd George during the First World War
Churchill and Lloyd George were both deeply distrusted by their Ministerial colleagues, who saw both of them as too clever by half. They were, and remained, close political friends, but were rivals as well. They did not always speak well of one another in private.
Until the 1920’s, Lloyd George was the more successful of the two. He also had more innovative thinking on economics in the 1930’s.  Churchill had a better understanding of the threat posed by the rise of Hitler. When Churchill became Prime Minister in 1940, he wanted to bring a then elderly Lloyd George into his Government, but the latter was pessimistic about Britain’s war prospects and did not take up the challenge.
Print Entry