In European Union and the United States. 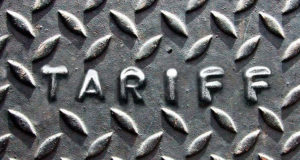 In the increasingly likely event that President Trump follows up on his steel tariffs by imposing similar tariffs on  European car imports, on so called “security grounds”, we can expect a full scale trade war to erupt, with no end in sight.

This will have disproportionate consequences for Ireland. A recent paper by the Brussels based think tank, Bruegel, estimated that 7.8% of the aggregate value added of the Irish economy comes from final products sold into the US market. This is far more than for any other EU country, and is twice the comparable figure for dependence on US sales for Germany, Netherlands and Spain, and three times that for France and Italy.

A disruption of trade links with the US, combined with the effects of a hard Brexit, could do deep damage to this country, socially and politically, as well as economically. Indeed Trumps actions change the entire context of Brexit.

The language used by President Trump about Prime Minister Trudeau after the G7 meeting was shocking. He treated the Canadian Prime Minister as if he was a domestic political opponent, not the Prime Minister of a friendly country, whose citizens have given their lives in common cause with the United States in two world wars. It contrasted starkly with the emollient language he used about the North Korean leader.

Berating allies, and flattering enemies is a low risk approach, in the short term. It is dramatic, and gets attention in ways that diplomacy never can.

The drama seems to be working well in the US Primaries, where President Trump’s allies are doing well. But trust in the United States is being undermined, and the prosperity of the developed world is being put at risk. The damage may long outlast the Trump Presidency.

The US has had trade disputes with allies before, but they have never before been supplemented by personalised attacks on foreign leaders.

The imposition by President Trump of steel tariffs, on security grounds, on the EU, Canada, and Mexico, suggests that the President believes he could not rely on these countries to continue supplying steel to the US in war time.  There is no basis in reality for such a contention, especially as regards Mexico and Canada which are beside the US.

The EU will retaliate by imposing selective tariffs on US goods, though only on half the scale of the US steel tariffs. It will also take a case against the US before a WTO (World Trade Organisation) panel. Canada and Mexico will do likewise. Given the way President Trump reacted to a difference of opinion about a mere communiqué from a G7 meeting, one can expect his language to escalate when the EU, Canadian, and Mexican tariffs begin to bite.

It could be argued that the EU, Canada and Mexico should not bother retaliating, because the US steel tariffs will do the most damage to US manufacturing industry and make it less competitive, but that is a difficult concept to communicate. So also is the argument that the US trade deficit is not due to unfair trade by others, but to the fact that Americans borrow and spend too much abroad, and are encouraged to do so by the lax fiscal and debt accumulation policies of successive US Administrations.

President Trump is now contemplating imposing tariffs on cars coming from the EU, Canada and Mexico on the same “security grounds”. He has initiated a legal process leading to that. On the narrow issue of cars, there is a difference between the rate of EU and US tariffs. The US tariff is 2%, whereas the EU tariff is 10%. That, of course, means that US consumers have cheaper cars and wider choice.

The tragedy is that President Trump’s initiative is driven by electoral politics, not by economic reality.

He is breaking up the rules based international trading system, which the US itself established in the aftermath of the Second World War, which is operated by the WTO.

The US sometimes feels it can get along fine without the rest of the world. Given its vast area and resources, it is understandable how it might come to think like that. For much of the nineteenth century, it acted on that basis. That illusion finally ended at Pearl Harbour in 1941.

Isolationism is no longer an option for the US. China is rising in global importance. Its economy is already as big as that of the US. It is attempting to build a global infrastructural and technological system centred on China, not the US. That is the rationale of the “one Belt One Road” initiative and of China’s plan to be the industry leader in the technologies of the future like solar power, electric cars and gene editing.

A wise US leader would be seeking to compete with China, by building closer economic ties with its allies, rather than using them as punch bags, in a political show designed to win votes in the Mid Term Congressional Elections.

The G7 spectacle should prompt deep reflection on this side of the Atlantic. A looming trade war makes Brexit less attractive for both the UK, AND the EU. Both need to take time out to think. It is a pity that the time limits in the Brexit process do not allow both sides to take the time to develop a wider strategic view of their mutual interests before Brexit takes place. This needs to be  reconsidered in light of the prospect of a bitter trade war with the US and the rest of the developed world.

Such a strategic review cannot be completed by next October. An extension of the Article 50 time limit for the Brexit negotiation makes far more sense this week, even than it did a month ago. Time limits create tension, whereas it is reflection we need now.

IMMIGRATION FROM AFRICA IS INEVITABLE….