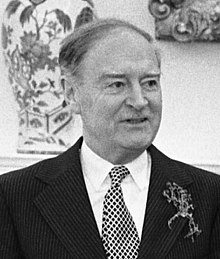 He was a pioneer in important ways.

At the age of only 28 in 1948, he became the  first ever Chief Whip  a Coalition government, a daunting task for which there was no precedent for him to follow.

At the age of 36, as Minister for External Affairs and following the removal of the Soviet veto, he led Ireland into the United Nations in 1956.

In 1965, he became Leader of Fine Gael and injected a strong element of badly needed professionalism into the party’s work.

In 1970, and again in 1972, he took vital political stands, as leader of the Opposition, to protect the integrity and security of the state. In both instances, he put the country’s interest before his own political advantage.

In 1973, he became Taoiseach in a National Coalition government with the Labour Party. He managed to coalition exceptionally well, and the two parties continued to work and campaign together right to the end. In this, he established an important precedent for future coalitions.

His government faced a severe economic setback arising from the Oil Crisis. Despite this he saw progressive social welfare changes introduced, which gave increased security to families. His tax policies were designed to ensure that the burden of recession fell on the broadest shoulders. The economy was recovering strongly when he left office. He lost the 1977 Election in face of demagogic promises from his political opponents.

In private and in public, he was the same… self effacing, modest and kind. He was authentic in every way.

As a public speaker, he could hold an audience like few others. Like his father, he was a  deeply convinced democrat,  who understood the fragility of democracy, and his speeches were full of respect for the institutions that make democracy possible. This, and his deep religious faith, made it easy for him to accept the defeats and setbacks that are part of political life.

He was devoted to his family, to his late wife Vera and to their three children. To them, I extend heartfelt sympathy of the passing of a great servant of Ireland.