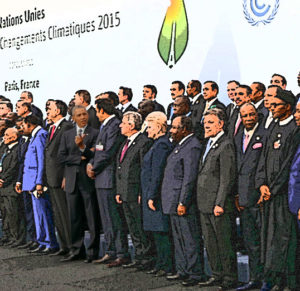 I visited Washington this week and was here for an eventful week.

At a time when there is persuasive evidence that drought is causing a huge famine in East Africa. Yet the Trump Administration is announcing plans to scale back America’s already modest contribution to the battle against man made global warming.

The new Administration wants to increase fossil fuel production in the US.

The limitations on CO2 emissions by US power plants will be cut.

Coal production will be boosted .

One study suggests that the policy changes will mean that the US will only cut its CO2 emissions to 14% below  2005 levels , rather than  26/28% below as it had promised under the Paris  Accord.

Meanwhile in East Africa, lack of water is causing crops to wither and animals to die of thirst. I heard former Vice President Al Gore claim recently that a similar drought in the Middle East contributed to the start of the Syrian Civil War because of the hardship it caused. Lack of water leads to poor sanitation. This, in turn, leads to diseases like cholera.  This risk is especially high in camps, where climate refugees congregate.

And global warming evaporates water. That is the price paid for  CO2 emissions in wealthy, water rich, countries.

As Isaac Nur Abdi, a nomad in Southern Sudan, said

“There is no such thing as free water”

A FAILURE ON HEALTHCARE

Meanwhile President Trump has had to withdraw his Health legislation because of a lack of support.

There is no doubt that US health policy is in need of reform.

It is exceptionally costly.

The incentives in the system are often perverse.  Over prescription of painkilling pharmaceuticals is generating major addiction problems.

The proposed reforms would have put some check on the open ended growth of the cost of Medicaid, a health programme for lower income families. There would have been losers from this.

But the cost of Medicaid has risen from $180 billion in 2005 to almost $360 billion today, but without any clear evidence that it improved health outcomes.

The cost of providing health care for ageing populations will eventually pose a threat to western democracies, because democracies have difficulty making choices in this field, as demonstrated again in Washington this week.