THE VICIOUS TRIANGLE OF DOUBT 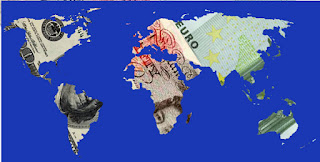 The coming weeks are of vital importance for the European, and the world , economy. I was in Brussels last week and the sense of urgency was palpable.  The French Prime Minister, Francois Fillon spoke of our being on the edge of a volcano that could blow up the EU, and our   contract between the generations, unless it was capped.
As the European Commission said   last Thursday  we need to break the vicious triangle  between doubts over

Unless we find a reasonably convincing way of resolving these doubts, and   of  breaking the vicious triangle,  whereby each doubt  aggravates the other, we  are in  real difficulty.

GETTING GOVERNMENT BORROWING UNDER CONTROL

The sustainability of Government debt depends on vigorous action to cut spending, and increase revenue. But this will take time. In the short run, the debts of some countries , including Ireland,  will actually increase as a proportion of national income.  This is because the gap that has opened up suddenly , between  revenue and spending ,  cannot be closed overnight. This is Ireland’s case.
In the meantime, therefore, we take holding actions   to restore confidence to potential purchasers of Government bonds.
One thing we should do quickly  is introduce the permanent  European Stability Mechanism. It could act  more flexibly, and more quickly,  than present arrangements to support Governments in difficulty which require consent by 17  national parliaments.
Pending that, the European Central Bank will have to continue to buy Government bonds.
Essentially, the official agencies need to be able to deploy such a huge volume of financial fire power that it will scare off  speculators who might be tempted to short Government bonds of some countries, in the hope of making a quick profit.
In that sense, I believe the United States is giving good advice to the EU, and that Germany is being too hesitant.
We also need to work on a Euro Bond proposal, which I wrote about in a previous post on this site, although that does not provide a short term solution.
A credible plan to reduce debt levels in the public and private sectors in most EU countries is crucial.    We should not  think that “Austerity” is  an optional policy choice. It is an arithmetic necessity.
THE POLICIES OF THE ANTI AUSTERITY  PROTESTERS WOULD BRING US BACK TO THE LIVING STANDARDS OF THE  1930s…ALMOST OVERNIGHT
The current protests about “austerity” do not put  forward any credible policy alternative,  that would not involve a far more dramatic, and more sudden, fall in living standards than anything current policies would  entail.
A refusal to service existing debts, while maintaining current spending levels, would lead to an  immediate drying up of Government  funds. Cheques would bounce, and people would try to get their money out of the country.  A return to the living standards, and autarkic economic policies, of the 1930s would quickly ensue.   That is where the protesters ideas would lead us very quickly indeed.
It is striking that the media, which is giving generous coverage to these protests, is not subjecting the protesters ideas and proposals to any intellectual scrutiny at all.  For example the protests led the news bulletin on Ireland’s national station, even though only 1000 people took part in the protests in  Ireland .

Meanwhile far reaching measures to tackle  our current problems are being agreed by the EU, which, if  applied rigorously, and this is s a big IF, would gradually improve the competitiveness,  and  the public  finances,  of  EU countries.
I believe the so called “six  pack “ measures, recently agreed in the European Parliament,  will be a lot more intrusive than  most people think. They could mean, for example, that countries that fail to take action on unsustainable economic practices will be liable to EU fines.  This plan will apply to much more than excessive Government borrowing. It could cover wage setting policies and unsustainable energy policies.  If these measures can be implemented under the existing Treaties, I doubt if we will need any further Treaty change.

BUT ‘’TOO BIG TO FAIL’’  BANK PROBLEM IS BEING IGNORED
Restoring the credibility of the banking system will require more honesty than we have had up to now. Some countries, including Germany, have been unwilling to have their bank’s situation independently examined.  The stress tests have been based on heroic assumptions, notably in respect of the repayability, in full,  of all Greek debt.
None of the proposals currently being considered address what I consider to be the basic banking  problem.
In the present artificial setup,  some banks are too big too big, and too interconnected with other banks, to be allowed to  fail.
This is because all banks in the EU have been allowed to borrow from ,and lend to,  one another  at wholesale level all across  the EU, and some of them have got very big doing that, but, when they get into difficulty,  they can only  be rescued ,or wound up,  at national level.  Risk taking is at one level, but responsibility is at another.  That has proven to be a recipe for disaster.
A bank that is free  to  borrow and lend with other banks all over Europe quickly can  quickly grow  too big for its home country to manage. That is what happened to Ireland’s banks.
I believe that it is now only possible to tackle the “too big to fail “problem at EU level, because too many  banks have already grown far too big for their home counties .
But a bank that is too big to fail at national level would not necessarily  be too big to fail at EU level. We need a real EU Single market for banking if we are to get control of the “too big to fail” problem.
To achieve that we should   have

Getting growth prospects to improve is actually the most difficult of the three things we must do. This is because the things that Governments can do takes the longest times to deliver results.   But it is very important. For example, the structure of the Italian economy is so creaky that it starts to have price inflation if it grows by more than 1%.  Greece and Portugal have similar constraints.
The measures needed to put this right will  deliver big returns in the long run, but  are difficult politically, and sometimes slow to deliver results in the short run ie. before the next election.
Let me illustrate my point by referring to some the things the OECD recommended the Irish Government do to lift Ireland’s growth potential. The OECD said there should be

The OECD recommends much closer inspection of teaching standards, which will be difficult to do without recruiting a lot more schools inspectors. This is hard to do when there is an embargo on recruitment under the EU/IMF programme.

Apparently there are  more  teachers in Ireland  in schools that have not been inspected in the last 5 years in Ireland than  in ANY other OECD country!
TO GET LOWER INTEREST RATES TODAY, A COUNTRY MUST  SHOW  HOW  IT WILL GROW FASTER TOMORROW
All these ideas make a lot of sense. Similar, and more far reaching ideas, have been put forward for other EU countries.
Implementing them now would not bring instant results.  It will not lead to a quick  short term spurt in economic growth.
But doing  them now,  would show the sort of  political determination that would  give  lenders  confidence that Ireland  will grow faster  in the  longer  term. The  same sort of decision making is needed in France, Italy, Spain, Portugal, Cyprus, Slovenia  and Greece.
That would then encourage them to lend money now at reasonable rates to all these countries, including Ireland.
That is how all the three things, Government debt, banks and growth prospect are linked to one another.  The vicious triangle must be turned into a  benign triangle
Print Entry