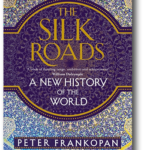 As Russia and Turkey broker a Syrian ceasefire without the involvement of the United Nations or the United States, some are wondering if the axis of  influence  in the world is shifting from the Atlantic to the centre of Asia.

Like many others, I enjoyed reading the best seller,   “The Silk Roads, a New History of the World”, by Peter Frankopan.

The period  the book covers runs from the time of the Babylonian Empire right up to the present day.

The area it covers is everywhere between Ireland and Vladivostok, and between the Indian and Arctic Oceans.

The centre of that world is somewhere near the Caspian Sea. The constant theme, through the whole time, is a struggle within this huge area, for resources, and for  the  means of contact with the outside world.

The rivalry between the Roman and Persian Empires is described.

So is the  rise of Islam, and the  claim is made that Islam succeeded partly because it  provided Arabs with a unifying identity, in places of the rival religions and heresies that predated it.

The claim is made that Jews in Palestine initially welcomed Muslim rule. Indeed it is noteworthy that, 700 years later, Jews, fleeing Christian Spain found refuge in then, Muslim ruled, Greece.

The role of Genghis Khan is described and it is claimed that, after the initial disruption, Mongol dominance gave relative stability to Central Asia.  The Mongols did not come all the way to Western Europe because they found much richer lands to conquer in India and China.

Russia’s constant  fear of being encircled, or hemmed in, within the Eurasian landmass is also examined. After its defeat in the Crimean War in 1856, peace terms were imposed on Russia, by the victorious British, French and Turks, which closed the Black Sea to the Russian Navy. This was despite the fact that the Black Sea was the exit route for a third of Russia’s exports. This remained a huge grievance for the Russian leadership, and a similar feeling of being hemmed in lies behind Russian tactics today, in respect of Crimea and Syria.

Hitler, who remembered the starvation in Germany during the First World War, was determined, as one of his war aims, to seize the grain growing regions of Ukraine and Southern Russia. His plans in this respect were well signalled in his book Mein Kampf, which he wrote in the 1920’s and which Stalin had read.  But Stalin did not draw the logical conclusion and was caught off guard, when Hitler attacked the Soviet Union in 1941.

The thesis of this book is that world politics rotates around the struggles for control of resources of food, energy, and minerals on the Eurasian land mass.

This is in contrast to a view that would see the Atlantic as the axis of political and economic power.

From the very beginning of this story, peoples in Eurasia were changing sides, finding new allies, and adopting different religions. Inconsistency was the one constant among the players of this great game.

For example, in view of the present   obsession in the United States and Israel with the possibility that Iran might have nuclear capacity, we are reminded that, in 1974, President Ford agreed to sell American nuclear reprocessing technology to Iran. That was in the time of the Shah, who was overthrown five years later, but the geostrategic risk of proliferation inherent in selling such a technology to Iran under any regime was the same then as it is now.

Interestingly President Ford’s Chief of Staff at the time was Richard Chaney!

As we move towards an more uncertain world, reading this book will help one to be a little less surprised by what happens, because one will learn that something rather like it will have happened before.

WILL THE 1998 BELFAST AGREEMENT SURVIVE THE  UK GENERAL ELECTION OF 2020?