THE NATURE OF MONEY, AND HOW CREATING MORE OF IT CAN BE BOTH GOOD, AND BAD.

In ‘reflexivity’ theory, “The Ascent of Money”, Niall Ferguson 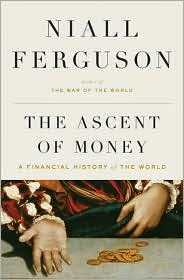 In his book “The Ascent of Money” the historian Niall Ferguson told the story of the development of money – a means of exchange that depends on trust – from its earliest origins in ancient Mesopotamia, when clay tokens were used, to the dominance of gold in the later Middle Ages, to the scrapping of usury laws in 1833, whose repeal allowed  for an expansion of interest-bearing loans and paper money. Money became credit. Today 95% of the money we use is bank credit, and only 5% or less is cash.
Gradually the amount of purchasing power in the economy came to bear less and less on the relationship to the reserves of gold or other capital that was supposed to back it all up.
There were many frauds, scares and panics along the way. The historical episodes described in this book discredited the mathematical models of finance, which purport to predict human behaviour on the basis of past performance.
They enhanced the credibility of the ‘reflexivity’ theory of the world famous hedge fund owner George Soros, who sees market behaviour as a reflexion of the irrational hopes, fears, and biases of millions of half-informed people.
Recent financial history, with its succession of bubbles and busts, shows the auditors, non-executive directors, and regulators, who are supposed to lean against the wind, are too easily carried along, with everybody else, by the irrational hopes and fears of the half informed.
Niall Ferguson is a Professor in Harvard. He said that in 1970, only 5% of the men graduating from Harvard went into banking and finance. By 2007, 20% of the men and 10% of the women were doing so.
One started to get too much of a good thing. The ever more creative forms of credit offered by the expanded financial sector fuelled a consumption boom in the US. Consumer spending jumped from 62% of income in the 1960s to 74% in 2006. Household savings almost completely disappeared.
This was made easy by the free movement of money across the world. The huge savings that Chinese factory workers had to accumulate, because they have no welfare state to fall back on, if they lose their jobs, were recycled into consumer loans which enabled Americans to buy more Chinese goods than they could  afford.
This book put our present anxieties in an historical context and would provide useful background reading for the Irish Banking Enquiry.
Print Entry