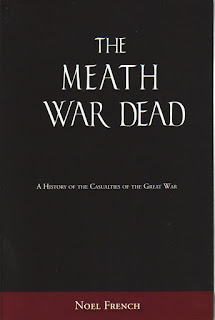 I attended the launch recently in Trim Co Meath by the Taoiseach, Enda Kenny of a book by local historian Noel French containing short biographies of over 500 Meath men who died in the 1914 – 1918 War.
About five times that number of Meath people would have joined the forces , put their lives at risk, suffered greatly, but survived.
A similar story could be told about all 32 counties of Ireland, and it will be,   because Noel French’s book is part of a series.
The men who served in the Great War did so for a variety of motives.
Some undoubtedly joined for economic motives because of lack of employment, or poor employment, at home.
Others joined for adventure, and probably assumed the war would not last long.
Yet others, a  minority, would have done so mainly out of loyalty to the United Kingdom.
All were volunteers
An important number would have done so out of rational political conviction, and out of a sense of how small nations, like Ireland itself, should and should not, be treated, and  in answer to a call to do so on that basis, from the Leader of the Irish Parliamentary Party, John Redmond  .
They joined the forces because they wanted to protect the rights of small countries, like Belgium, which had just been invaded in an entirely unprovoked way by Imperial Germany.
Imperial Germany believed that going through Belgium was the best way to attack France. But the attack on France was itself unprovoked and pre emptive, because Germany feared an attack by France in response to Germany’s support for the Austro Hungarian Empire, in its completely unnecessary war on another small country, Serbia.
This was the background to John Redmond’s call on Irishmen to join the armed forces, to which so many Meath men responded.
It is also the background against which the wisdom of the passage in the Easter Week 1916 Proclamation, which refers to Proclamation’s framers’  “gallant allies in Europe”, should be judged. These “gallant allies” were Imperial Germany, the Austro Hungarian Empire, and the Ottoman Empire.  “Neutrality” was not part of Irish Republican thinking in 1916.
Because this 1916 ideology became so prevalent in Ireland until very recent times, the Irish people who fought in the Great War were made to feel outsiders in their own country for over two generations.
It is only now, thanks to novelists like Sebastian Barry and historians like Noel French , that the memory of their sacrifice is being reclaimed, and their subsequent rejection by politically correct ideology remedied.
Reading Noel French’s book, I came across so many familiar names of Meath families I know, who lost a loved one. My own then small rural parish of Dunboyne, lost  14 men in the trenches, one of whose  relatives is now  a  local member of Meath County Council.
The Meath War Dead is published by the History Press Ireland of 119 Lower Baggot Street Dublin 2
Print Entry