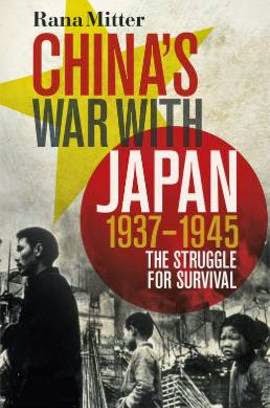 For China, the Second World War began in July 1937, and did not end until August 1945. China’s casualties in the war were greater than those of any other nation in the world, apart from the Soviet Union.
Whereas the enmities of the Second World War in Europe have largely been subsumed by the economic integration within the EU, they are still very much alive in the brittle relations between Asian states, notably between Japan and China.
I have just finished reading “China’s War with Japan, 1937-1945, the struggle for survival “ by Rana Mitter, which sets out the background to this brutal war and explores all its complexities.
Throughout the nineteenth century the central government in China had been steadily weakening. The Emperor had to rely on local warlords, raising their own forces to suppress the Taiping Rebellion between 1856 and  1864. The government had to make major trade concessions to western powers and lost effective control of some of its key port and its trade policy. It  had to allow foreign troops, including Japanese units, on  parts of its territories.
After the overthrow of the Emperor in 1911, the Nationalist Chinese Government of Chiang Kai Shek, began to reduce these foreign privileges, and in 1930 took back control of its own trade policy. This was seen by Japan, which from the early 1930’s could no longer rely on western markets because of the protectionist policies of western powers, wanted to create its own exclusive  economic zone, including China.
Japan decided in 1937 that it would demand that China cut its tariffs on Japanese goods, employ Japanese military advisors, and join a military pact ultimately directed against the Soviet Union. It did not intend to conquer China, just to control it.
But a minor incident between Japanese and Chinese troops near Beijing in 1937 escalated into a general war, because the Chinese did not, as the Japanese expected, back down and apologise.
Japanese troops took over large parts of Northern and eastern China, committing major atrocities including the rape of Nanking. There was no outside intervention to defend the territorial integrity of China, by the United States or anyone else. The Chinese retreated inland but did not surrender or make peace, as most people expected they would.
The war in China was costly and Japan needed more resources, and it  decided it had to choose between seizing territory and resources from the eastern part of the Soviet Union, or from South East Asia.
It decided on the latter option.
This led to a response from the United States which, in November  1941, demanded that Japan withdraw its troops from both Indochina and China.
Japan saw what was coming and attacked Pearl Harbour a few days later.
This did not solve China’s problem, because the United States gave priority to rolling back the Japanese in the Pacific, and to liberating Europe, over direct US military  intervention in China. Indeed the Japanese continued to advance further and further into China right up to 1944. China sensed that it was being treated as a second class global citizen, and that shapes present attitudes, both to the West and to Japan.
Print Entry

THE LONG CRISIS IN GREECE