THE LONG HISTORY OF DISTRUST BETWEEN EUROPE AND THE MIDDLE EAST……. WAS THE BREAK UP OF THE OTTOMAN EMPIRE SUCH A GOOD THING AFTER ALL ! ?

In “A Line in the Sand, Britain, France, France and the Struggle that shaped the Middle East”, James Barr, Middle East, Muslim world 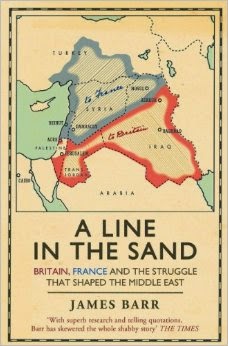 I have just finished “A Line in the Sand, Britain, France and the Struggle that shaped the Middle East” by James Barr (Simon and Schuster). It is a great read.
It deals with relations between France, Britain, and the Muslim world, a topic that has become tragically topical in recent days.
France and Britain were allies in the First World War, but bitter rivals, when it came to dividing up spheres of influence in the hoped for break up of the Ottoman Empire, something both correctly anticipated would be a result of an Allied victory in the War. The wishes of the local population, whether they were Muslim, Christian or Jew, were not considered to be a deciding factor at all. At most, they had to be “managed”.
While the First World War was still on, France and Britain drew up the famous Sykes/ Picot agreement in 1916, which allocated present day Syria and Lebanon to France, and allocated an area stretching from present day Israel, through Jordan, to Iraq, to Britain.
Britain wanted its chosen area, particularly Palestine, as a shield for the Suez Canal (a vital link to British India). It also wanted access to oil in present day Iraq. The French wanted access to the same oil, and saw itself as a protector of Christian interests in Syria and Lebanon. The crucial question was territory, rather than people.
But the British also wanted Arab support to defeat the Turks, so it promised support for an independent Arab state of Greater Syria ,which included areas it had agreed could be under French influence, and thus was in conflict with their agreement with the French.
Furthermore Britain wanted Jewish support in the US to push the US Administration to help the British war effort. In pursuit of the latter goal, they agreed in 1917 to a “homeland” for Jews in Palestine, in the Balfour Declaration.  This, of course, ran totally counter to Arab interests…..and led eventually to the present state of Israel on formerly Arab lands. Again the views of the local inhabitants counted for little.
These contradictory promises, made in desperate efforts to win the war, were to poison relations between all the parties for years to come. They lie behind the violent distrust that was  manifest in the vile murders in Paris last week.
When France and Britain came, after the end of the First World War, to occupy their respective areas under their 1916 deal, with the backing of a League of Nations mandate, they each faced revolts from the local populations. But there was no “European solidarity”. The Anglo/ French rivalry was such that they each gave support to the other side’s rebels!
This rivalry continued into the Second World War, and Barr argues that British support for the ejection of France from Syria in 1944/5, so poisoned de Gaulle’s relations with Britain, that it contributed to his vetoing British membership of the Common Market 20 years later.
France also gave strong initial support to the Zionist resistance to continued British presence in Palestine in 1947/8, in revenge for the support the British had given to the ouster of France from Syria in 1945.
As we can see in the Middle East today, and also in Bosnia, we have yet to escape from the consequences of the break up of the multi ethnic Ottoman Empire, and the ignorant response of European nations to this event. Because the Ottoman Empire had fallen behind materially, it was wrongly and patronisingly assumed to have no valid lessons to teach about how to manage the intermingled ethnic and religious populations of the Middle East.
The Ottoman system of government, while discriminatory, enabled populations of very different ethnicities, and opposed religious outlooks, to share the same cities and villages, as they did in many parts of both the Middle East and the Balkans under Ottoman rule.. This Ottoman model of qualified tolerance was bound to come under pressure once Ottoman power was removed, and free rein was given to the view that “self determination” for a single predominant ethnicity or ”nation” was the natural order of things, a view which became fashionable which before , during, and after the First World War in the western world, including in Ireland as we know only too well.
This book shows how selfish and ill informed European interventions between 1916 and 1950, cast a long shadow today.
Print Entry

THE SOURCE OF ECONOMIC SUCCESS IN THE 21ST CENTURY….EACH COUNTRY WILL HAVE TO RELY ON ITS CHILDREN’S SKILLS AND INGENUITY IN AN INCREASINGLY COMPETITIVE WORLD