THE LONG CRISIS IN GREECE 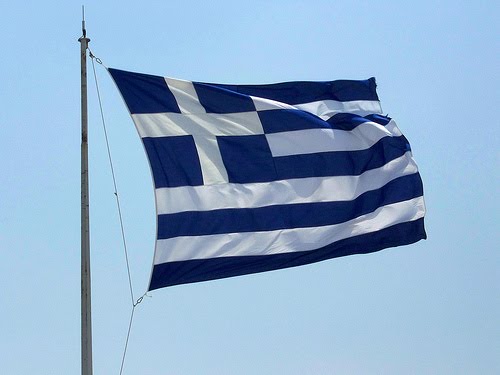 As I write, it remains unclear whether Greece will reach an acceptable deal with its creditors, who are mainly other European Governments.
It is important to say that the recession in Greece has been much deeper than expected by those who agreed the original bailout package with Greece in 2010, a 25% fall in output as against a predicted 7% fall. The budgetary adjustments have also been bigger than in any of the other bailout countries.
It must be acknowledged that, when Greece got a bailout from the other Governments and the IMF, the ultimate beneficiaries included banks, not only in Europe but also elsewhere.
These banks had been lending to the Greek Government, long after they should have stopped doing so, and have forced Greece to confront reality. They assumed that, because Greece was in the euro, someone somewhere would ensure they were repaid.
Yes, some the banks,who were thus saved from their errors, were indeed German. But many of the banks who were rescued from their embarrassment were British and American, and the British and American taxpayers have avoided a proportionate exposure to the costs, through the Greek bailout, of saving THEIR banks!
The Euro zone is bearing the main burden, while the others offer free advice.
That said, it would have been in nobody’s interest, for a panic about Greece to have infected banks around the world. Bank credit constitutes 95% of the money we use, and a collapse in confidence in money could have had really devastating global consequences. Without confidence in banks, economic activity would have come to a shuddering halt.
We would have had a crash, rather than just a crisis. Hindsight critics can ignore that now, but it was a real risk then.
The origins of the Greek problem are very deep and longstanding. For years, Greeks had been consuming more than they were producing, retiring on pension earlier than is normal in other countries, and running an educational system that had few links with the real economy. All these gaps were bridged by borrowing money from foolish investors, who averted their eyes from the profound underlying problems of the Greek economy.
Meanwhile Greece supported a cumbersome and slow courts system, and an equally inefficient system of public administration and of regulating entry to professions. These systems got in the way of growth, because growth needs a capacity to move human and other resources quickly from less, to more profitable activities. Such systems might have been affordable in a very rich country, but Greece never was a rich country.
Meanwhile Greece failed to develop a broad modern industrial sector. It relied too heavily on tourism and ship building. Greeks made money selling things to each other Greeks, rather than to the rest of the world.
Greek businesses stayed small, not big enough to become exporters.  Indeed the proportion of micro businesses in Greece is very large, and this sort of business frequently under declares its income for tax purposes. This is part of the reason for poor tax collection in Greece.
There is growth potential in the Greek economy.
A McKinsey study back in 2011 suggested, for example, that Greece could develop medical tourism (it has a large population of dentists).  I met someone recently who was waiting for ages a treatment for tonsillitis in Ireland, who went to Greece, and had the operation done in days.
McKinsey suggested big scope for Aquaculture and food processing in Greece.
Greece could develop its port infrastructure to provide a regional cargo hub.
But none of these things can be financed unless Greek business people have access to a healthy banking system.
The Greek banking system is far from healthy. Its capital is tied up in Greek government bonds. The credibility of these bonds has been called into question by the brinkmanship and loose rhetoric of the new Greek government. The uncertainty over whether Greece will still be in euro, in a few months time, also inhibits investment, and nationalistic rhetoric in Germany on that topic has added greatly to that uncertainty.
Greece’s future needs to be underpinned by a credible plan that focuses on private sector led growth, backed by a healthy European banking system, that invests in productive Greek businesses, rather than just in Greek government bonds, as it did in the past.
If that is to happen, it is not just Greece that needs to do a lot of homework, but the entire European Union. The EU needs a real banking union that allows banks to lend across borders to good projects wherever they are found in the euro zone. This needs common EU legislation on debt collection, collateral and the like.
The fact that Greek, Irish, Portuguese and Spanish taxpayers have borne large burdens to recapitalise their banks, or have undertaken new debts, as part of a project to sustain the global banking system, also needs to be recognised by the rest of the world
This cannot unfortunately be done straight away. The problems that gave rise to the crisis must be understood, and fixed, first.
The Greek election result would not lead one to believe that Greeks understand the source of their problems. And the credence that many voters elsewhere give to rhetoric that suggests that being “against austerity” constitutes an implementable policy, in a world of free capital movement, suggests that many do not understand what went wrong or what can realistically be done about it.
But ultimately there must be an honest attempt to find a fair settlement of these legacy issues.
A Global Debt Conference, some time before 2022, when Greece has to make huge repayments, should be considered.  It could be sponsored by the IMF, and might negotiate debt relief on the basis of the extent to which countries have, in the seven years between 2015 and 2022, implemented growth promoting reforms and achieved primary surpluses on their current budgets, taking account of the demography and the tax raising potential of each country.
Print Entry