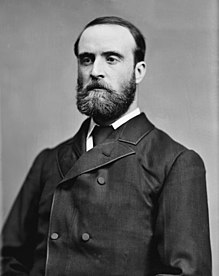 I am deeply honoured to be invited to speak in memory of him today, for many reasons.

I admire Parnell for his parliamentary achievements, for his ability to combine popular agitation in Ireland with inter party leverage at Westminster to make concrete gains for his country.

Politics is often about timing, knowing how far to go and when to stop.

Parnell knew when to be tough and uncompromising, and when to make a deal.

As President of the National Land League but also as Leader of the Irish Parliamentary Party in Westminster, he exploited both offices to win land reform in Ireland.

The 1881 Land Act conceded the principle of fair rents, to be settled by judicial decision, and not just by economic or market forces.

The idea ran against many of the prevailing economic doctrines of the time. It also ran against Parnell’s own economic interests as a landlord.

It was not enough for some of Parnell’s supporters, but Parnell knew that, if it was rejected, the whole cause of land reform might have been lost.

So he devised the strategy of “testing” the Act.

The Land Act was the first step towards the eventual transfer of land ownership, with compensation, from landlords to tenants, giving this numerous body of people, the former tenants, a stake in the country, a sense of shared ownership of Ireland.

In retrospect, it is probably good that this was done before Ireland became independent.

Trying to solve the land question after independence would have put an immense strain on Irish democracy. It would have been either deeply divisive, or financially costly, or both.

Parnell’s personal approach to the land question was more nuanced than one might think. Unlike Michael Davitt and most of his own party, he did not favour land nationalisation. Nor did he favour what eventually happened, the outright and compulsory transfer (with compensation) of all land from the landlord, to the farmer who was already farming it.

He proposed an amendment in 1888 which would have restricted tenant purchase to holdings where the rateable valuation(PLV) was 20 pounds, a  small farm of no more than  30 acres. Later he revised the figure up to 50 pounds  PLV.

Basically his position seems to have been that he wanted to allow the survival of small residential Irish landlords (like himself), and only wanted compulsory transfer of the  holdings of the  absentee landlords.

He argued that residential landlords were “well fitted” to “take part in the future social regeneration” of a Home Rule Ireland.

It is worth reflecting on the political methods Parnell used to persuade Parliament to take the first big step towards land reform in Ireland.

In 1879, Ireland, and the young leader of the Irish Parliamentary Party, faced something, with which we have unfortunately recently had to cope with again, a sudden  fall in income, partly  due to the forces of globalization.

The heavy concentration of small holdings on the western seaboard meant that, in that heavily populated part of the country, people had a very precarious livelihood.

In the 1870’s , the immensely fertile grain growing regions of the Mid Western United States gained  access to the global market, thanks to  massive railway construction and improved shipping.

These regions were able to supply grains to Europe at prices well below those at which Irish, British, and other European farmers could produce them.

This meant an immediate fall in farm incomes in these islands, and a fall off too in the demand for migratory seasonal labour in Scotland and the east of Ireland, on which many western farmers had come to depend to supplement their incomes and to pay their rent.

And then, in 1877, 1878 and again in 1879, there were disastrous summers in Ireland, and blight again afflicted the potato crop. Potato production plunged from 4 million tons in 1876 to only 1 million in 1879. People began to starve.

Parnell saw this crisis as an emergency, but also as an opportunity.

He went to the United States himself to raise funds to relieve starvation in Ireland , AND to finance a new National Land League founded in1879 to campaign for a  change in the basis of land ownership in Ireland.

He addressed the US House of Representatives in February 1880 on the situation in Ireland and, through the New Departure, he won Fenian support for this  land campaign, by linking it with the cause of self government for Ireland.

I might add here that the New Departure removed the gun from Irish politics for 35 years, before the Ulster Volunteers landed their arms in Larne.

Parnell’s ability to turn, what was potentially a humanitarian disaster into a vehicle  for political and economic reform, marks him out as a politician of exceptional talent.

The ideas were not all his own, but he could fuse into something potent.

It is fair to say that the disastrous fall in incomes that occurred in the late 1870s would have happened, no matter what system of land tenure, or what system of Government Ireland then had.

It took someone of Parnell’s genius to turn it into something more far reaching, and productive.

This is, I think, something that current Irish political leaders can draw from Parnell’s career.

In a crisis, and we may soon face another externally generated crisis here around Brexit, it is possible to get people to see things differently, and to agree to changes they might not undertake in calmer and less anxious times

Parnell’s other great achievement was the introduction of the first Home Rule Bill of 1886.

Like the Land Act, this was a radical departure, when seen against the background of British opinion, at the time and since, in respect of indivisibility of the “Union”, a majoritarian Union of four nations, in which England , and English opinion, always constituted the majority

One has only to reflect on the fact that it was not until Tony Blair became Prime Minister, that Home Rule for Scotland and Wales was achieved.

The fact that, as early as 1886, a century earlier, the principle of Home Rule for Ireland became the policy of the UK’s biggest political party, the Liberals, is a measure of the force of Parnell’s parliamentary influence.

I am proud to be here for a more personal reason. Parnell became the MP for Meath in 1875, and I was one of those elected to represent the same constituency less than 100 years later.

Parnell entered Parliament as a member for Meath in 1875 in a by election.

He had previously contested a by election in Dublin county, but was defeated there, by the Conservative candidate , Colonel Taylor, of Ardgillan near Balbriggan.

Interestingly, in light of subsequent events, the 27 year old Parnell relied heavily, in securing the Home Rule nomination to stand in both contests, on a fulsome endorsement from his local Catholic Parish Priest in his home county of Wicklow, Father Richard Galvin of Rathdrum.

Fr Galvin described Parnell “up to the mark” on all the great questions of the day, which meant for him,

After losing in Dublin, in seeking the nomination in Meath, Parnell also had an animated interview with the then Catholic Bishop of Meath ,Thomas Nulty in the Presbytery in Navan.

He secured the bishops support, and the highlight of his successful campaign, according to his biographer, FSL Lyons, was a great meeting in Navan, attended, inter alia, by many parish priests and curates.

As we know, Parnell did not retain this support later.

Much of his effectiveness as an Irish leader depended on his influence over Liberal and non conformist opinion in Britain.

He lost that influence because of the O’Shea divorce case in 1890, and this loss of support, and hence of his political effectiveness, created a huge dilemma, which split the Irish Parliamentary Party.

A majority of the Party wished him to stand aside, at least temporarily.

This view was influenced primarily by political pragmatism, rather than by anything else.

Although a clear majority of the Irish Party MPs wanted Parnell to step down, partially or fully, Parnell would not accept the majority verdict, something that would not happen in any Irish parliamentary party today.

Unsurprisingly the Catholic Church in Ireland supported the majority position. Unfortunately some of the things that were said on its behalf, to discourage people from voting for Parnellite candidates, were consistent neither with Christian Charity, nor Catholic doctrine.

I remember in my first campaign in 1969 meeting a neighbour, Charlie Curley of Castlefarm, near Dunboyne, who told me his father had been ardent Parnellite, who had heard Parnell speak under the Big Tree in Dunboyne village. The tree still stands, a mute memorial to the deceased leader.

Dunboyne was a Parnellite parish, but during the split, the local parish priest preached a particularly strong sermon against Parnell.

A majority of local people decided to punish the PP by resolving not to make offerings at funerals.

As a result, until funeral offerings were finally ended in the 1970s in Meath , Dunboyne was the only parish in the diocese where  they did not take place.

The Parnell split in Meath is well described in an excellent book by David Lawlor, whose own grandfather was involved.

Reading that book, I was amazed to discover how many of the descendants of  the protagonists in the split were still active in local politics. One was the longtime chairman of Meath County Council, and close political ally of my own, the late Paddy Fullam, whose grandfather had been elected as an  anti Parnellite MP in South Meath, only to be unseated as a result of  an election petition based on some things overenthusiastic priests had said in his support.  The petition was ruinously expensive for the Fullam family, even though Mr Fullam was not responsible for the offending remarks.

What then are the lessons we can learn from Parnell’s career?

We can learn of the value of discipline and unity in a political party.

Without that discipline, the Party would not have won the Land Act of 1881 or the Home Rule Bill of 1886. If the Irish representation in Westminster in the 1880’s consisted of 100 independent MP’s , they would have achieved little!

We can learn the importance of turning a crisis into an opportunity, as Parnell did with the agricultural crisis of the late 1870’s, using it win land reform. Politicians need to be imaginative, as Parnell was on that occasion.

We can learn the value of taking one’s seat in any Parliament to which one is elected, because, in Parliament, every vote counts.

Every vote will count in Westminster, when decisions have to be taken on Brexit, and on whether the people are to be consulted  again on whether they want to go ahead with it, when they know, at last, what it really means.

I commend the Parnell Society for keeping alive the memory of the great constitutional politician, Charles Stewart Parnell.

I  also thank the society for the annual Parnell Summer School, held in Parnell’s old home at Avondale, which has allowed the tremendous historical research, now being done, to reach a wider audience.  Long may this work continue to be supported.