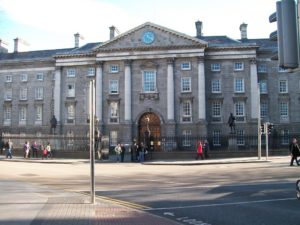 A century ago on Tuesday, on 25th July 1917, the Irish Convention convened in Trinity College to make what would prove be the  final, non violent, attempt to agree a basis for relations between Ireland and Britain on an All Ireland basis.

Some of the issues the Irish Convention tried to settle one hundred years ago still divide us today….

The Convention was widely representative.

The biggest group in the Convention were the Irish Parliamentary Party, and John Redmond was among the members.

It was he who had suggested a Convention, when he rejected a suggestion by  the UK government that Home Rule be introduced for the 26 counties only, with the position of the 6 counties left aside for the time being.

The Ulster Unionists were present, led by one of their MPs , JM Barrie.

Southern Unionists also had representation, and their leading figure was Lord Midleton.

There were six representatives of the Labour movement.

The members included the  Mayors of the major cities, including Belfast, the chairmen of a number of County Councils (including I noted Meath County Council), four Catholic Bishops , two Church of Ireland Bishops and the Moderator of the Presbyterian Church.

The President of the Belfast Chamber of Commerce, Mr Pollock, and William Martin Murphy, the Dublin employers leader and owner of the” Irish Independent” , were also among the members.

Seats were allocated to the Sinn Fein Party, of Eamon de Valera and Arthur Griffith, but they refused to take them up because the terms of reference of the Convention did not allow for complete separation between Ireland and Britain.

Although Sinn Fein was not there, the Convention was a unique gathering together of Irish people of widely divergent goals.

Whereas previous attempts to resolve the “Irish Question” had taken place in Westminster in negotiations with British politicians, this was a meeting of Irish representatives, trying to resolve the outstanding issues between themselves, without direct external involvement.

In that sense, it was arguably inconsistent of Sinn Fein, with their “ourselves alone “ philosophy, not to take part, because it would have given them an opportunity to put their case to their fellow Irishmen, without what they would regard as British interference.

Although the constitutional struggle for Home Rule had been going on for 40 years, and Home Rule had passed into law three years before, the relationship between the Unionist parts of Ulster and the proposed Home Rule Government in Dublin remained a matter of deep contention.

Ulster Unionists had, six years earlier, armed themselves to resist Home Rule and they were encouraged in this by the UK Conservative Party, who even tried, in 1911, to persuade the British Army not to take any action against the Ulster Volunteers. It could be argued that this had been a treasonable course for the Conservatives to take.

Notwithstanding this activity, the UK Parliament had passed the Home Rule Bill into law in September 1914, but its operation was postponed because the Great War had started a month earlier, and it had been felt at the time that all energies should be devoted to winning what many hoped would be a short war.

Three years later, when the Convention convened to discuss how Ulster might fit into the Home Rule scheme, the Great War was still going on. Large numbers of Irish soldiers had been killed on the Western Front and in Gallipoli.

Conscription had been imposed in Britain and in most belligerent countries , but not in Ireland. This was resented by some in Britain.

Also resented in Britain was the  Rising against British Rule, supported by Germany, that had taken place the previous year. Many of those involved were still in prison.

So the atmosphere was fraught, not just in Ireland, but in Britain too.

The Conservative Party, which had gone to such lengths six years previously to oppose Home Rule was now a predominant part of the UK government, although the Prime Minister, David Lloyd George, was a Liberal.

Despite all these difficulties, Irish Nationalist ambitions were high.

Partition was rejected on principle, but no very practical ideas were advanced on how to overcome the opposition to the imposition of Home Rule from Dublin in the counties of North East Ulster.  There seems to have been an assumption that Britain would force Ulster Unionists to accept Home Rule, although the practicalities of doing this, especially during a war in Europe, were never addressed.

He told his supporters in Killaloe that, if Ulster Unionists did not come in under Dublin rule, they would

“have to go under”

Later, in Bessbrook Co Down, during a by election campaign which his party lost, he said

“If Ulster stood in the way of Irish freedom, Ulster should be coerced”.

By attending the Convention, Mr de Valera could have tried persuasion, before resorting to the coercion he was threatening.

He apparently felt  was simpler for him to blame the British for not coercing Ulster,  than it would have been to sit down in the Convention and try to persuade his fellow Irishmen of North East Ulster to accept some form of agreed Ireland.

John Dillon, the deputy leader of the Irish Parliamentary Party warned de Valera of what attempt to coerce Ulster would entail. Speaking in Armagh, of de Valera’s idea that Ulster be forced to “go under”, he  said ;

“Against such a programme Unionist Ulster will fight to the last man living; and to all the other horrors of the situation would be added a civil war as bitter and relentless as that which reduced the country to a desert in the seventeenth century”

A similar, but less lethal, air of unreality prevailed in Southern Unionist circles. They wanted no partition, and no Home Rule.

The Convention was an attempt to reconcile these irreconcilables positions, and , given the unpromising  conditions, it made some progress.

It found a solution to the Land Question, that subsequently was enacted by the Free State government in the 1920’s.

A serious effort was made to agree some form of united Ireland. Ulster Unionists put forward a federal approach whereby an Ulster regional government would have substantial autonomy but within an all Ireland framework. Nationalists were not in favour of this. Nationalists suggested extra representation (appointed or elected) for Unionists in an all Ireland Parliament.  Unionists were not keen on this because they feared they would still be outvoted, particularly on the issue of tariffs.

Ulster industry wanted continued free trade with Britain, whereas nationalists want the power to impose customs duties on some British goods to protect Irish industries. This issue is arising again in the Brexit negotiations.  In effect Unionists wanted to be in a Customs Union with the UK, whereas Nationalists did not.

John Redmond was prepared to accept immediate Home Rule, without the power to levy customs duties, but his supporters were not and he had to back away from his proposal.

The Convention came close to agreeing a majority report with significant Nationalist and Unionist support, but this was stymied by the big German offensive of 1918 which led the UK government to propose imposing conscription in Ireland. This threat of conscription led to a crisis which destroyed any hope of agreement.

Looking back, the pity is that a Convention of this kind was not attempted in 1911, when Home Rule was first mooted. It might not have led to agreement but it might have contributed to a better understanding of the Ulster problem by all shades of Irish Nationalism.