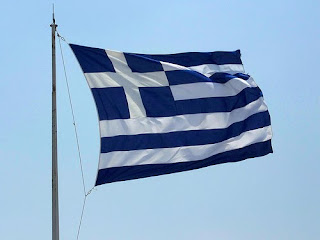 The European Union has many lessons to learn from the Greek crisis and the panic in the bond markets that has given rise to it. But they are also an opportunity to deal with problems that might otherwise be put on the long finger.

The fiscal crisis has created the conditions in which Europe can assemble the political momentum to deal with the underlying cause of its present economic problems. That cause is a huge loss of competitiveness vis a vis Asia, which had been concealed from view by the artificial and temporary credit expansion of the past ten years.

Credit expansion was a sort of anaesthetic that dulled the pain of an underlying loss of competitiveness. Now that the anaesthetic has been abruptly withdrawn, there is real pain. But that pain is a spur to action to cure the problem, and without it the problem would have been allowed to get even worse before anything would have been done.

European countries will have to restore competitiveness by shifting resources into education and infrastructure and away from consumption of all kinds, including Government consumption, and by cutting service and wage costs through greater competition and productivity. The European Union will have to take on the powers necessary to prevent a recurrence of a Greek style crisis, powers it should have been given when the currency union was formed.

For example, Greece should not have been allowed to join the euro until it had first undertaken structural reforms that would have put its public finances on a sound and transparent long term basis. The EU should have insisted that Greece’s pension and tax collection problems, problems that are now being tackled in the midst of a crisis, were dealt with before Greece was allowed to join the euro. This would have involved much greater EU interference in matters that Greeks might then have regarded as purely national questions. But if , as now appears to be the case, states within the euro are not to be allowed to default, and are thus to benefit from low interest rates that go from being in a currency union, then there is no choice but have this sort of interference .Otherwise there would be a continuing risk of euro countries going off the rails repeatedly and having other countries repeatedly in a position of having to pledge their credit to get them back on track.

This same sort of EU involvement with domestic economic policy making will continue to be necessary after a country has joined the euro. While the problems of Greece predated its entry to the euro, those of Spain and Ireland arose after they had joined, and were able to enjoy interest rates that were lower than they would have had to pay if they still had their own currencies. The EU needs to be able to supervise the volume and direction of credit expansion in member states of the euro to ensure that it does not lead to an unsustainable private sector credit situation that eventually puts Government credit at risk too.

The EU also needs to be able to supervise developments in the relative competitiveness of different countries within the euro zone. If a country is losing competitiveness because its costs are rising faster than those of its neighbours, it will lose business and that will mean that its Government revenues will fall. That, in turn, could eventually lead to solvency questions for the Government, as we have seen. If Governments in the euro zone are not to be allowed to default on their debts, and if other EU states may have to ask their taxpayers to help out, that means that a loss in competitiveness of an individual euro zone country is a matter of legitimate concern for all euro zone countries.

I believe it was both fair and reasonable for Germany and others to insist on a long term and detailed austerity programme from Greece before releasing funds. It is true that these measures will depress the Greek economy in the short term, but that had to happen sooner or later anyway, and the sooner it is done the sooner Greece will get back on a sustainable path.

But Germany and others who are asking for these severe measures to be adopted by Greece now should recognise that the obligation to follow a common economic policy within the euro zone applies to them too.

It should not be forgotten that one of the first countries to break the original euro zone rules on Government borrowing was Germany itself. In fairness though, Germany got itself back in line without having to get financial help from other members.

More importantly, all EU countries already have an obligation under EU Treaties to treat economic policy making as a matter of common interest .

Germany has benefitted from being in the euro by having a more competitive exchange rate than it would have had if it still had the Mark. If Germany was still using the Mark, and had had the big trade surpluses and high savings rate that Germany now has, the Mark would have risen dramatically against all other currencies in Europe , and German exports would have become too expensive for other people to buy.

Thus being in the euro has helped German exports and boosted savings in Germany. Much of these savings ,that were not invested at home ,were invested in Greek bonds partly because Greece was using the euro and there was none of the exchange risk that might have applied if the German banks had bought (say) Turkish bonds instead. This is why it is in Germany’s own interest that Greece should neither default on its debts, nor leave the euro. That would hurt German banks and that in turn would hurt finances of the German Federal and state Governments.

Countries, like Germany, also benefit from being in the euro in promoting their exports, because the euro zone provides an enlarged home market in which their exporters face no extra costs associated with having to be paid in different and volatile currencies. They are paid in their home currency, the euro. Their exporters also benefit, as stated earlier, by having a more competitive exchange rate than they would have had if they were still using the Mark.

For these reasons the help being given to Greece by the other euro zone countries should not be portrayed as some sort of charity, but as a loan that is being extended in the rational self interest of both the lender and the borrower.

After all, the overall medium term financial position of the countries of the euro zone is strong.

But will it be enough? Will the Greek system crack under the strain? If it is not enough and if Greece, or some other euro zone country, needs to come back again for more loans because it has difficulty borrowing commercially, will the remaining euro zone countries then be prepared to use their credit a second or a third time to help out the country in difficulty?

My sense is that there will be a willingness to help out again, so long as in the meantime, strong and enforceable arrangements have been put in place at EU level to ensure that all euro zone members run their economies properly and that deep seated structural and competitiveness issues are tackled vigorously by all members .

One of the difficulties in selling the present plan to lend money to Greece to electorates in Germany and elsewhere was that the existing EU arrangements to ensure each euro zone country ran its economy properly had visibly failed. By the time any other country might need help, that has to be put right.

I believe that can and will be done. But one should not underestimate the challenge. Giving more powers to the EU will not be agreed easily. Germany can insist on what Greece does to qualify for a loan in the present emergency but ongoing supervision of all euro area economies, including Germanys own economy, is another matter. The German Constitutional Court, in its judgement on the Lisbon Treaty, has questioned whether European integration can be allowed to go any further, because it said it did not believe that a sufficiently democratic system applied at EU level. It questioned whether the elections to European Parliament created a sufficient democratic mandate to allow more policy making to be transferred from Germany to the European level.

If the German Court adheres to this interpretation and is not over ruled by the European Court, and if the euro is to be kept, and if keeping the euro requires more power to be exercised at EU level over the economic policies of euro zone states, then more democracy will have to be built at EU level , at least for EU countries that are in euro. That would appear to be the logic of the German constitution.

One way of doing this would be to have one of the EU’s many Presidents directly elected by the people of countries in the euro. For example, the President of the Euro Group (currently the Luxembourg Prime Minister who is also Finance Minister) might be elected by the people of all euro zone countries, rather than be selected at a private meeting as is currently done. Such a course should meet the democratic requirements of the German Constitutional Court in that it would create a Europe wide election in which economic policy would be debated.

The bottom line is that where there is a will, there is a way. Europe has a single currency. It may amuse academics to speculate about what thing might be like if we went back to national currencies, but that is not going to happen any time soon because the costs would be enormous.

The problems the crisis has revealed are not currency problems as such. They are structural economic problems, that we were going to have to deal with sooner or later, no matter what currency or combination of currencies we used.

For example, there is a long term problem in Europe with the cost of ageing , but the disciplines imposed by the present crisis may actually be a help in giving Governments the courage and the space to deal with those problems at the same time as they deal with the short term cash flow problem.

Action on the one will help with the other. For example, raising the pension age saves money in both the short term, and in the long term. It is also easier to make unpopular decisions like that in a crisis than it is in calmer time. The challenge for Europe is to ,turn the present crisis into an opportunity to put our economy on a sound footing, a footing that will enable us to prosper in a twenty first century world where we will be only one of many players, not the dominant player as we were in the nineteenth century.

Special Thanks to Guillaume Piolle for his photo

THE EUROPEAN UNION MUST DEVELOP A PATRIOTISM OF ITS OWN.

From the Abbey to Zagreb