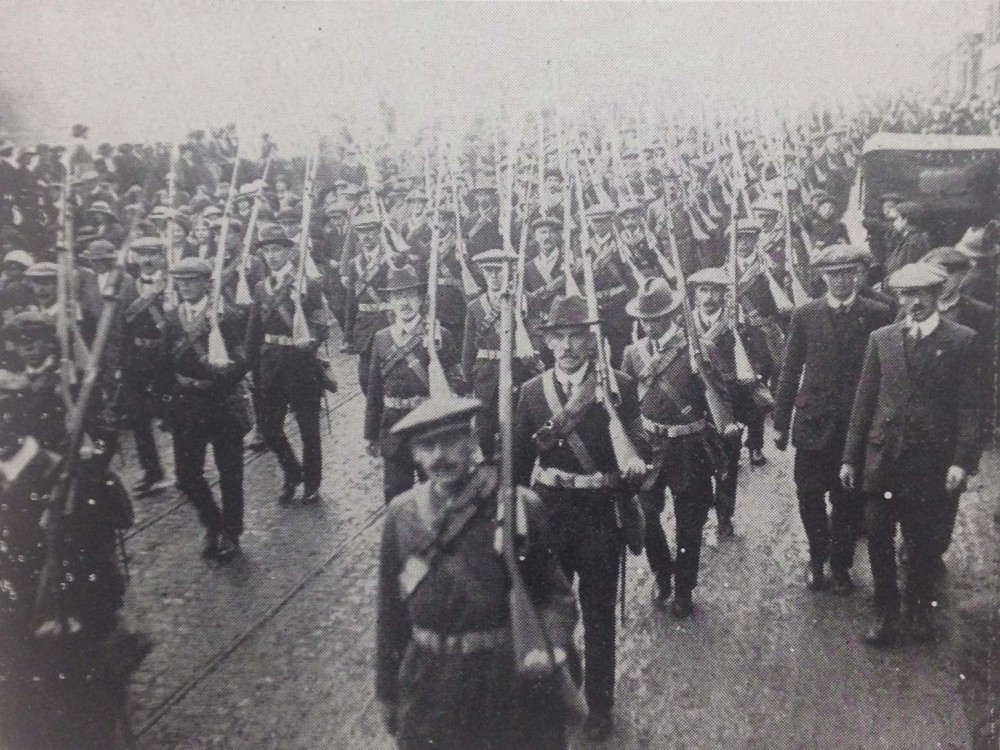 I am honoured to be asked to speak here in Summerhill at an event to commemorate the formal end of the First World War.

At least 35,000 Irish soldiers died in the War. Many thousands more suffered horrendous wounds and were handicapped or in pain for the rest of their lives.

Their sacrifice was little recognised by the new Irish state, for many years.

Indeed those who had served and survived were made to feel unwelcome when they came home.

After the War several county councils voted not to employ ex servicemen and, in some cases, even to withhold educational scholarships from their children.

In 1921, it is estimated that, of the servicemen who returned to Ireland,

39% of those in Munster were unemployed,

WHY DID IRISHMEN VOLUNTEER?

Those who volunteered to fight in the War did so for many reasons.

Some did so because they believed the cause was just.

Neutral Belgium had been invaded by Imperial Germany. Louvain had been burned and atrocities committed by German forces.

France had been attacked and many Irish people saw France as a friend, who should be defended.

Others volunteered out of economic necessity, or in search of adventure and higher purpose.

Others did so out of loyalty to the United Kingdom, in whose Parliament Ireland was represented, and which had recently granted Home Rule to Ireland.

WHAT HAD BEEN ACHIEVED WITHOUT WAR

To understand this, we should recall what had been achieved for Ireland, by non violent politics, before the War began, and which those who volunteered, would have felt were achievements worth defending.

The crowning achievement was the enactment into law of Irish Home Rule on 18 September 1914.

These achievements demonstrate what Irish MPs could do by taking their seats, and using their votes,  especially when the government of the day was in a minority. This is something on which nationalist voters in Northern Ireland today should reflect.

The  famous Woodenbridge speech of the Irish Party Leader, John Redmond, on 20 September 1914, urging Irish men to volunteer, must be seen against the  background of what had been achieved, and, in particular, that Home Rule had been placed on the statute book just two days previously, on the 18th September 1914.

Its implementation of it was simply postponed until the end of what most people expected would be a short war.

At Woodenbridge, Redmond wanted to show everybody, including Ulster Unionists, that, with the passage of Home Rule, things had changed.

He wanted to persuade them to come in voluntarily under Home rule, when the War was over. To that end he wanted to show them that, in some matters, Unionists and Nationalists were now “on the same side”.

Unfortunately for all of Europe, the War was not, as many hoped, over by Christmas of 1914.

WARS CONTINUED AFTER THE WAR

It lasted, as a world war until November 1918, and it spawned local wars that went on until 1923, including in this country, in Russia, in Turkey and in Poland.

Europe, after the War, was very different from Europe before it.

While the Imperial idea, and multi ethnicity, clashed with the ethnic nationalism that flourished in intellectual circles, the political arrangements worked and were adaptable.

Austro Hungary had a multi ethnic Parliament with representation from the minorities present.  23% of the Austro Hungarian Emperor’s subjects spoke German, 20% spoke Hungarian, 16% Czech or Slovak, 10% Polish, 9% Serbo Croat,  8% Ukrainian, 6% Romanian and so on. All coexisted.

The United Kingdom of Great Britain and Ireland may have been dominated by the English, but its Parliament had large Irish and Scottish representation.

The Russian Empire contained minorities too numerous to list.

The permissive consensus, that allowed these entities like these to resolve their internal differences by generally peaceful methods, was shattered by the sacrifices and brutality of the War.

It was a war that lasted far longer, and took far more lives, than anyone expected when it started.

THE LEGACY IS STILL WITH US

It is a global tragedy that the gross over reaction of Austro Hungary to the assassination of Archduke Ferdinand and his wife at the end of June 1914, started a conflict, with whose consequences we still live with today.

100 years later, Europe and the EU face many crises.

These four crises put immense stress on the bonds of tolerance that hold the European Union together.

They can bring back to the surface long buried tensions and resentments, some of which date back to events of the 1914-1923 period.

For example, the present day fears in the Baltic States, of both Russia and Germany, can be explained by what happened between 1917 to 1923.

Russian fears of encirclement, encouraged by President Putin, can be traced back to the humiliating peace imposed on it by Germany in early 1918, and to the subsequent western interventions in its Civil War.

The authoritarian and nationalistic trends in Hungarian politics can be explained by the fact that the post War settlement was much harder on Hungary, even than it was on Imperial Germany. As a result of it, large Hungarian speaking populations remain in neighbouring Serbia, Slovakia and Romania to this day.

The state of Israel, and the conflict with Arabs it has engendered, has its origin in a promise made by Britain to win Jewish support in the War.

In 1919, the First World War left much of Europe starving and desolated. Order had broken down. States were too weak to exercise their proper monopoly on the use of force.

Resentments abounded about the supposed injustice of the imposed peace settlements.

Demobilised soldiers know no other trade than war.

Minorities, particularly the Jews, were scapegoated all over central Europe, for misfortunes for which they had no responsibility at all.  Bolshevism was seen as an imminent threat.

So the turbulence experienced in Ireland between 1919 and 1923 was far from unique.

The miracle was that, after it was over, democracy survived here. It did not survive in other parts of Europe.

States and populations turned to paramilitary organisations to restore order, in these frightening circumstances, and out of an understandable desire for order, grew Fascism and the Nazis.

On the other hand, if the War had not happened, there would probably have been no Rising in 1916, no executions, no conscription crisis, and no consequential Sinn Fein landslide in the 1918 Election.

Home Rule would have come into effect for 26 or 28 counties, and the remainder of Ireland, 6 or 4 counties, would have continued under some form of direct rule.

If the War had not happened, Home Rule could have evolved towards Dominion status, and eventually to full independence, but without the violence.

BUT WHY DID IT HAVE TO HAPPEN?

COULD IT HAVE BEEN AVOIDED?

But why did the First World War come about?

“Sleepwalkers, How Europe went to war in 1914” by Christopher Clark, Professor of Modern History in Cambridge describes the statesmen, who stumbled into War in 1914, as

“sleepwalkers, watchful but unseeing, haunted by dreams, yet blind to the horror they were about to bring to the world”.

A web of interlocking commitments, designed to give individual countries security and peace behind their own borders, ended up tumbling the whole continent into War.

Austro Hungary had a defensive pact with Germany. Russia set itself up as the protector of Serbia. France gave Russia a blank cheque in the Balkans because it needed Russian assurances against Germany. Britain had a rather more vague understanding with France.  It feared any Russian rapprochement with Germany because Russia could then freely threaten British interests in India.

So, when Franz Ferdinand was murdered in Sarajevo on 28 June 1914 by assassins that had come from Serbia, the possibility that all these dominoes might fall in the direction of war opened up.

But it was only a possibility.

Russia could have held back from full scale mobilization in support of Serbia, and France could have made it clear that it did not wish to get involved in supporting a Russian attack on Austria, so long as Germany stayed out too.

Britain could have said it would remain neutral in a German war with France, so long as Germany respected Belgian neutrality.

But none of these things happened.

The interlocking commitments between countries that led to war were not, according to Christopher Clark, “long term  features of the European system, but the consequence of numerous short term adjustments” made in the immediately preceding years.

The War was not inevitable, but it suited some leaders to pretend afterwards that it was, so as to avoid facing the consequences of some their own omissions, ambiguities and evasions.

Some of the issues involved are still current.

For example, how does one pursue a criminal conspiracy launched from another jurisdiction?

If something like the European Arrest Warrant was in place, could Austria have obtained the extradition of some of the conspirators from Belgrade without threatening war?

Luckily, the NATO ultimatum of 1999 did not have the same dire global consequences, mainly because Russia stood aside in 1999 but not in 1914.

As we see an escalating confrontation between Russia and the West over Ukraine, the lesson I draw is that leaders must not just think of the next move, but of the likely counter move, the move after that and so on, bearing in mind that nothing is inevitable until it has actually happened. Political leaders usually have far more choices open to them than they are willing to acknowledge.

Another lesson is the value of having a structure of peace, like the European Union, to which all neighbouring countries belong, which uses rules interpreted consistently, regular meetings, and economic interdependency, to manage conflicts.

As we are learning today in Anglo Irish relations, breaking from such a Union is the ultimate folly of Brexit.