THE GERMAN ELECTION OF 2013……..DID ANGELA MERKEL GET TOO MANY VOTES? 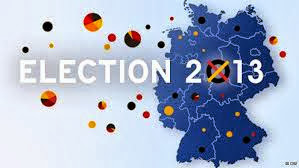 I am in Germany this week, in the immediate aftermath of the General Election, in which Chancellor Merkel’s CDU/CSU alliance emerged as the largest party in almost every state in Germany.
But, although her own party’s vote is up more than 7 percentage points, her favoured coalition partner, the FPD, is out of the Bundestag altogether, because it did not get the minimum of 5% of the vote in Germany as a whole. They missed the threshold by just 0.2%!
In the last election, in 2009, the FDP got 14.6% % and 90 seats, and Angela Merkel’s CDU/CSU got only 33  %. This time, Angela Merkel wanted her party to be the one to make the big gains, and she succeeded…too well. Her vote jumped from 33% to 41%.
Under the German system of proportional representation, each voter casts two votes, one for the representatives in her/his own district and another for the national lists of one of the parties.
A practice had grown up of some CDU/CSU voters voting for their own party in their own district, but giving their second vote to the national list of the FDP, so they would get over the 5% threshold and be available as the preferred coalition partner for CDU/CSU.
This time Angela Merkel made it clear she wanted every vote to come to her own party. As a result the  proportion of the CDU.CSU electorate” lending” their vote to the FDP fell from 5 % to 2%.
As a result the FDP are out, and Mrs Merkel has to look for a coalition with less amenable partners, either the SPD, or the Greens. Her situation is not unlike an Irish politician who headed the poll, but failed to bring in his/her running mate.
Coalition negotiations will be prolonged and difficult, and all that could have been avoided if just 1% more CDU voters had given their second vote to the FDP, and enabled them to survive!
Given that the SPD lost 11% of the vote in 2009, after their previous coalition with Mrs Merkel from 2005 to 2009, they will not be keen to repeat the experience. Prior to the 2009 election, the CDU/CSU were the biggest party only in four big states in  Southern Germany,-Bavaria, Baden Wurtemburg, Rhineland Pfalz, and Saxony, and the SPD got the most votes in every other German state.
Now, after the 2013 election, the SPD are the biggest party only in their strongholds in Hamburg and Bremen, and in pockets in the Ruhr, Dortmund and Kiel.
The SPD will also look at the more recent experience of the FDP, who went from 14.6% down to 4.8% as the outcome of their coalition with Mrs Merkel, and they will hope  to pass the responsibility over to the Greens.
The SPD base never fully accepted the 2004 labour market reforms of the last SPD led government, which did so much to improve German competitiveness, and it was the subsequent Merkel led governments, not the SPD, got the credit for the resultant economic growth.
This is important because Germany has some more tough reforms to undertake, if it is improve the productivity of its domestic economy. The OECD has said that Germany’s domestic service economy has low productivity, entry to professions is too tight, and fees and prices are too high as a result. A major overhaul of energy policy is needed too, if Germany is to survive without nuclear power.
A CDU/CSU deal with the Greens would be another way to provide a majority. The social bases of the two parties are similar. Since Merkel agreed to abandon nuclear power, the policy divide is not as wide as it was.  Fewer CDU/CSU Ministers would have to lose their jobs to accommodate the Greens, than would have to step down in a coalition with the SPD. But some Greens would find a coalition with Mrs Merkel to be anathema, and she is cautious and may not want to try such a novel coalition either.
If no deal with either the SPD or the Greens is reached, a second election is possible, which might favour Chancellor Merkel and allow the FDP to get above 5% and thus to restore the old coalition.
But the prolonged instability involved in a second election would be dangerous for the global economy and for Europe, and that is why it will not happen.
Print Entry

IS THE CYPRIOT FORMULA THE RIGHT ONE FOR BANKS IN DIFFFICULTY?