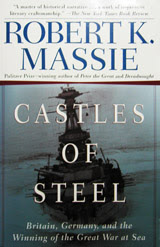 I read “Castles of Steel” by Robert K Massie recently.
This book gives a comprehensive account of the war at sea between Britain and Germany from 1914 to 1918.
The key naval battle of the war was fought at Jutland in late May and June of 1916. It was a stalemate. Britain suffered the more casualties, in ships and men. But the British fleet still dominated the North Sea after the battle, and a British naval   blockade of Germany continued as before. So in that sense, Jutland was a defeat for Germany.
Germany retaliated by submarine warfare, but that eventually provoked America so much that America entered the war on the British side.
For political and nationalistic reasons, Irish history teaching has underplayed Irish people’s sacrifice in the First World War. It will surprise many to know that more Irish people probably died in one naval battle at Jutland  in 1916,  than did  in the Easter Rebellion in Dublin a month earlier.
From my own county of Meath alone , three people gave their lives at Jutland in June 1916.
They were
Michael Clarke from Ratoath,
Laurence Hamilton from Dean Hill, Navan ,and
John Keappock from Claremont , Navan,  whose family I know particularly  well, and whose father was a member of Navan Urban Council at the time
The descriptions of naval tactics, in Robert Massie’s very readable book, are enlivened by excellent sketches of the characters of the leaders involved, particularly on the British side.
The First World War had been preceded by a naval arms race between Britain and Germany. The Kaiser had great admiration for the Royal Navy and wanted his navy to overtake it.
In the pre World War One period, the world economy had become globalised and interlinked, much like it is today.  The Kaiser saw control of the seas, as vital to Germany becoming the ultimate arbiter of world affairs, in much the same way that control of space gives the United States strategic dominance today.
By the time the war broke out, Britain still had a bigger navy than Germany.   But Germany’s ships were better constructed, and German gunnery was more accurate.
The relative range of guns, and the relative speed of ships, decided who won in a naval battle.  If an enemy ship could be kept within the range of your own guns, and you were fast enough to be able to stay out of range of his, you would win the day.
The Kaiser kept his navy in port for much of the war, because he did not want to put them at risk.  Germany had secure natural ports at Kiel and Wilhelmshaven, whereas the UK had no really secure ports, apart from Lough Swilly in Ireland , which was very remote from the  field of conflict.
Britain used Scapa Flow in the Orkneys as its principal naval port, but it was quite vulnerable until  major defensive investments had been undertaken.
Print Entry

GERMANY BASHING IS BESIDE THE POINT……….. IT IS TIME TO FACE THE REAL CHOICES