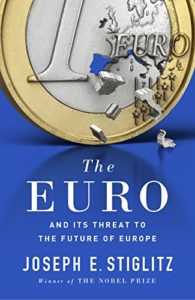 The Nobel Prize winning author of “Globalisation and its Discontents” has set his sights on the euro in his latest economic polemic.

He sees the euro as a product of what he calls “neo liberal economics”, which he believes was in the intellectual ascendant in 1992, when the detailed design of the single currency was put in place.

Given that the idea of an Economic and Monetary Union in Europe goes back to the late 1960’s, and that one of the central drivers of the project was a French Socialist, Jacques Delors, this claim is contestable.

The flaws in the design of the euro derive more from poorly thought out compromises between France and Germany, and from wishful thinking, than they do from ideology.

Wishful thinking lay behind the decision to have a single Europe wide money, but to leave the supervision of banks, who create the money in the form of credit, to 17 different national authorities. This happened because Germany wanted a German authority to supervise German banks, and not a Europe wide one.  And it was these poorly supervised German banks who led the way in the mistaken cross border lending to Greece, Spain, Ireland and Portugal.

It is easy to see that mistake now, but the problem at the time was persuading Germany to give up its beloved DM at all, in favour of the euro. The mistake arose from national pride rather than economic ideology.

Obviously, if there was to be a single currency, there had to be common rules for preventing any one country issuing too much of it, and thereby creating inflation and devaluing everyone else’s money. In this case, the mistake was made of assuming that the only risk of this happening was through governments borrowing and spending too much. This lay behind the 3% of GDP limit on government borrowing in the Maastricht Treaty.

But no similar, centrally supervised, limit was placed on private sector money creation through the banks. As we now know, it was cross border private sector credit creation, through banks, that created the problems in Ireland, Spain and Portugal, whereas it was only in Greece that government borrowing was primarily to blame.  Stiglitz argues that this focus on controlling government borrowing, and ignoring private sector banking activity, arose from an ideological bias in favour of the private sector. He has a point.

He also points out that imbalances arising from trade deficits and surpluses within the euro zone were ignored in the original Maastricht rules. Before the crisis, the Irish and Spanish balance of payments deficits, and their counterpart German balance of payments surplus, were signals of the same underlying problem. The excessive private sector borrowing in Ireland and Spain was stimulated by the excess of German savings. Germans were earning more than they were spending, so they sought a return on their money by lending it to the Irish and the Spaniards. The persistence of this imbalance was a warning signal that was ignored. The new EU macroeconomic imbalance procedure belatedly attempts to deal with this, but it remains to be seen whether it will be implemented properly.

More profoundly, Stiglitz argues that, for the euro to work well, there must be a consensus among policy makers in all euro zone countries of what makes an economy grow. That consensus is missing. German and French economic views differ as much now, as they did when the euro was launched.  Germany does not believe that governments should provide fiscal stimulus when there is a down turn, whereas, in France, the political consensus would favour stimulus in almost all affordable circumstances.

Stiglitz, like the French, believes that reducing deficits should not be a priority, when the economy is slowing.  This may be good advice in theory, but there are two difficulties with it.

The first difficulty is that it presupposes that governments will pay for what they spend in bad times, by cutting back in good times. But that is usually politically impossible. This is a practical flaw in Keynesian economics.

The second difficulty concerns a fundamental fact that is not mentioned once in Stigltz’s 350 pages. This is the ageing of the population of all EU countries over the next 40 years. This reduces the ability of EU states to borrow and spend for other things.  The extra costs of pensions and health care for Europe’s ageing population will, if policies remain as they are, mean that the debts of EU governments will rise from around 90% of GDP today, to 400% by 2060. That prospect leaves little room for stimulative borrowing today.

In the 1990’s it was different. Then Europe had a younger population, there was an annual growth rate in world trade that was twice the present one.  There were growth promoting options then that do not exist now, and are not likely to exist in the near future. This limitation is ignored by Stiglitz, who blames everything on the euro.

He argues convincingly that the EU needs greater political integration, if the euro is to be a success. But some of the ideas he canvasses lack political realism, for example a tax on German trade surpluses, and a 15% EU wide income tax on incomes above €250,000 (on top of national income taxes)!

He argues that the euro is, to some extent, now being held together by fear. A currency break up would be so unpredictable that no one wants to try it. But fear is not a healthy basis for European integration. Ultimately a shared European patriotism, and a greater degree mutual trust between euro zone electorates, are needed if these electorates are willingly to put their savings at risk to insure one another against unexpected shocks.

Understandably, as an American and an economist, Stiglitz does not address how this might be done.  That is a task for Europe’s politicians, and so far they have failed to come up with many original ideas.

But if that task is successfully undertaken, the economic rewards for Europe of having its own global currency, and its own system of mutual financial protection for its member states and its banks, could be very great indeed. There are opportunities here, as well as threats, but this book unfortunately only looks at the latter.

Stiglitz might also have given greater weight to the improvements that have been made in the management of the euro in the past three years-in the form of better banking supervision, new bailout funds for states and for banks, and more subtle economic rules.

But this is not enough.

Some of Joseph Stiglitz’s other suggestions- a common bank deposit insurance system, a write off of some Greek debt, and a partial sharing of unemployment insurance costs- should be acted upon. They are needed to ensure that the euro is able to withstand the next economic shock, and should not be postponed until after the German, or any other, General Election.

A VISIT TO INDIA

DIFFERING OPINIONS ABOUT THE EU