The Dail in the 21st Century – book review 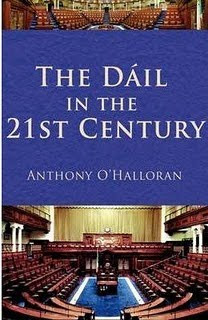 Dr. Anthony O Halloran is a lecturer in Politics in Carlow Institute of Technology, and holds a Ph. D in Government from U.C.C.

His thesis is that much contemporary media and popular criticism of Dail Eireann is misplaced. It compares what happens in the Dail with an ideal of liberal democracy and parliamentary sovereignty that has not existed anywhere in the modern era. This ideal would require Parliament to exercise directive power and for Governments simply to carry out the will of Dail, which it had arrived at through free deliberation among its members. . The ideal was only attained, if then, in the nineteenth century UK Parliament. This was before the advent of wide suffrage, and the need to make quick decisions on complex matters, necessitated the introduction of a tight party whipping system which made the ideal unrealisable and impractical.

But the expectations of citizens continue to be shaped by the theory that all power reposes in Dail Eireann. In our modern , complex, and globalised world, power is dispersed much more widely . While a Minister may be theoretically accountable to the Dail for the fact that hospital X Rays have not been examined by radiologists, the real responsibility lies elsewhere. This gap between theory and practice is corrosive of respect for the Dail, even though it is the theory not the Dail that is out of date.

The assumption is that TDs should be legislators. The truth is that individual Dail members do not have much influence on the content of legislation. The chance of an amendment to a Bill, that the Minister and his officials do not want, being accepted, is almost nil. Many sections of important Bills are not examined at all, and long ministerial amendments are often introduced at the last minute, to accommodate the rhythm of work of the civil service rather than that of the Dail.

Answers to parliamentary questions are often evasive and there is no appeal mechanism to which a TD who has good grounds to be unhappy with the answer can turn. The facility to ask supplementary questions is often used as much to generate sound bites as it is to probe inadequate answers. Time limitations, and the need to rotate questions among all the parties, prevent a forensic line of questioning being developed. Partly because the capacity of Dail questioning to achieve full accountability from Government has been inadequate, we have had to turn to Tribunals of Enquiry to get at the facts.

Anthony O Halloran does not dispute these criticisms but he says that the Dail has strengthened its role as a deliberative body in recent years. While it rarely exercises direct power over Government decisions, it has developed its role as a deliberative body. The Committee system has become stronger. Interest groups who find it hard to get a hearing from the civil service can often get it from a Dail Committee. Television broadcasting of Dail and Committee proceedings has also helped. The fact that the Oireachtas Commission, not the Department of Finance, settles the details of the Dail’s own expenditure makes a big difference.

I think the author’s presentation is a little too kind. Dail debates still take place in an empty chamber because everything is timetabled , and speakers increasingly read scripts in breach of the rules. Interruptions, which are supposed to encouraged, are actually discouraged. There is still no sanction on a Minister who give an inadequate or incomplete answer to a parliamentary question. Many sections of important Bills are still not debated in detail during Committee stage.

A solution to these difficulties could be found in one reform which is not touched on at all in this book….an enhancement in the powers of the Ceann Comhairle. The Ceann Comhairle should be given the power to require a Minister to come back with a new answer ,if the Ceann Comhairle at his complete discretion deems a reply to a parliamentary question was incomplete. He/She should have the discretion to disregard lists of speakers provided by the party whips, and call on members to speak on the basis of how long they have been sitting in the Chamber listening to other members. Likewise he should actively encourage orderly interruptions of speeches to promote dialogue. He should have a role in the timetabling of Committee stage debates to ensure that all important sections are discussed.

To have the mandate from the members to exercise this authority, without the sort of challenging of his rulings that has become commonplace, the Ceann Comhairle should cease to be chosen by the Taoiseach ,but should instead be elected by a secret ballot of members.

This is a very worthwhile book, which should be read by all who write editorials and otherwise comment on the so called decline of the Dail.

Book Review for the Irish Journal of Public Policy by John Bruton.

Title; The Dail in the 21st Century