The changing of the Guard 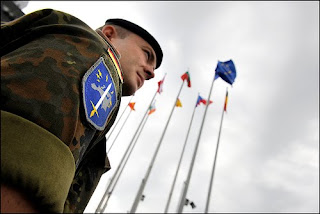 The European Union is in the process of installing a new Commission of 27 Commissioners, which will act as its executive arm over the next 5 years. Each individual Commissioner has been proposed by his or her home Government, has been accepted by the President of the Commission Barroso, and is now having to be approved by the European Parliament.

This power to accept or reject individual Commissioners is one of the important powers that the directly elected Parliament has. It is seen as an expression of EU democracy. There is, however, a temptation for the Parliament to use this power just to remind its electors that it has the power. For example a nominee for Commissioner in the last Commission was forced to pull out because of his private convictions on issues that he said he derived from his religious beliefs, even though he assured the Parliament he would not allow these beliefs to prevent him fulfilling his public functions.

This time the debate in the Parliament about the suitability of some nominees is breaking down on party lines, even though the ostensible arguments are to do with other ethical matters. I cannot comment on these ethical matters, although it does seem that they are ones that might be better adjudicated upon by an independent non political body. There seems even to be a sense that if one side in the Parliament blocks one nominee from the other side, then the other side should do the same in reverse. In that way, it is supposed, the Parliament will enhance its role as a power in EU affairs.

The controversy brings into focus an issue as to what sort of Commission Europe should have.

Or should it be a body that tries to be above national and ideological differences and which seeks a common European interest?

The original idea of the European Commission was in the second category.

Without ever really deciding that that was what the EU and its citizens want, we are now drifting quite quickly towards the former model. But all this politicisation of the Commission is taking place in a way that does not directly involve the European public. If we are going to incur the cost of having more a politicised Commission, we should get something more for it in terms of greater EU level direct democracy.

In the Convention which drafted the Lisbon Treaty, I argued for the direct election by all the people of the EU of the President of the Commission. This would have given the EU a Presidential election on US lines, and would have created a genuinely pan European debate about the direction the EU should take.

Notwithstanding the fact that they themselves were directly elected by the people and that the Parliament presented itself as the primary organ of EU democracy, I received no support for this proposal from the members of the European Parliament in the Convention. They were instead focussed on getting more powers for the Parliament, an exercise in which they had remarkable success.

The EU is not the only entity which gets into difficulty agreeing on new members of its Administration. The United States has similar difficulties.

The Partnership for Public Service has recently produced a paper on progress in filling the 500 or so politically appointed posts in the US Administration.

As of 31st December, 40% of these posts (295 key jobs) in the Obama Administration remain unfilled. This is almost a year after President Obama came into office! 67 nominees are awaiting Senate approval, even though the Senate majority belongs to the same party as the President .

Some are being held up by individual Senators as hostages in order to obtain a concession from the Administration on some unrelated matter. Some of the unfilled positions are in critically important jobs in security, economics and trade. At the same stage in the first term of the Bush Administration, it had a similar number of unfilled positions. Many able people are unwilling to allow their names to go forward for Administration jobs because the process is so onerous and unpredictable .

The EU should not go down this road. It should consider some non partisan pre vetting process to identify genuine ethical concerns in advance of names being put forward for the Commission, so as to enable the European Parliament to focus on the political choices the Commission as a whole will make, rather than on a party political game of tripping up individual nominees .

Figuring out the USA