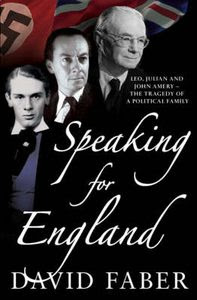 I bought “Speaking for England …Leo, Julian and John Amery…the tragedy of a political family” in a bookshop in Kensington, when visiting my daughters who live in London. It is written by David Faber, a former MP, and published by Pocket Books.
Leo Amery was a middle ranking English Conservative politician who was in Parliament during both the First and Second World Wars.

It was he, who famously said to the then Prime Minister, Neville Chamberlain, after the disaster in Norway  May 1940
“In the Name of God, go”
While Chamberlain had to follow Amery’s pithy advice on that occasion, Leo Amery was often too outspoken and too longwinded for his own good. He  assumed other politicians would not take political attacks personally, and lost many friends that way. Thus he did not really achieve the prominence, to which his talents and industry, would otherwise have entitled him.
He was no moderate.
He helped draft the 1912 statement, in which the Conservatives implied they would support the use of force by Ulster Unionists against the inclusion of Ulster in Home Rule for Ireland .

At the time  an opposition politician,  he  was also in constant  contact with army figures, like Sir Henry Wilson, who opposed to Home Rule, in a way that would be seen as completely unacceptable, and almost treasonable, conduct by an opposition politician today .
Although opposed to the inclusion of what became Northern Ireland in Home Rule in 1912, Leo Amery raised no objection he when the rest of Ireland achieved a greater degree of separation from Britain, under the Treaty of December 1921,than would have been entailed in Home Rule .
He subsequently was involved, in 1922, in having Lloyd George replaced as Prime Minister, thus ending of the three party Coalition Lloyd George had led.
Leo Amery, like Churchill, opposed the appeasement of Nazi Germany in the 1930’s.

He differed from Churchill on other matters. Though an Imperialist, Amery believed India should have been granted independent Dominion status much earlier than it was, whereas Churchill opposed any moves in that direction.
The tragedy of Amery’s life was his son Jack. Jack never settled ay school and seemed to have little or no sense of right and wrong, or of the rights of others.

Jack Amery lived from scams of various kinds, in Spain and France, during the 1930s, and was often financially supported by his father. He found himself in France in 1940, at the time of the German invasion, and made no attempt to come home, or to join his own country’s armed forces.

While in France, Jack had fallen under the influence of Jacques Doriot, a former Communist who founded the Parti Popular Francaise, a fascist anti Communist party.

When Hitler invaded the Soviet Union, Jack was persuaded by Doriot that Britain should make peace with Hitler, and join with Germany in fighting Communism. He made broadcasts from Germany to that effect, and attempted to recruit British prisoners of war to the German army, to fight against the Soviets.
He was captured in Italy at the end of the war, brought home to Britain, tried for treason, and executed, despite strong medical evidence that he was mentally ill throughout.

His father, Leo Amery, did his best to save his son, but the then Labour Government felt Jack deserved the supreme penalty for what he had done. His high profile did him no good.
This book gives an interesting insight into British politics between 1900 and 1945 and is well written, full of human interest, and never boring.
Print Entry

CHINA ,EUROPE, AND THE POLITICAL ECONOMY OF THE WORLD.