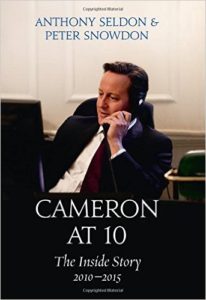 I read “Cameron at 10…the Verdict”, by Anthony Seldon and Peter Snowdon, over the summer, to understand how the UK came to hold a referendum on leaving the European Union, whose aftermath will bog down the UK and the EU in unproductive work, for years to come.

The first thing to say is that this is a good and well researched book.

It shows how the Liberal Democrat /Conservative Coalition came together in an atmosphere of good will and cordiality. It was bedded down by good institutional arrangements, which held it together right to the end.

But the cordiality disappeared when the Conservatives campaigned, with venom, to defeat the referendum on the Alternative Vote (PR in a single member constituency).

It is interesting to note that the Lib Dems loyally supported the austerity policies of the government, including on tuition fees which did them a great deal of electoral damage.

The reforms introduced by the Coalition, in education, health and welfare were important, and enduring. But they were not very different from what might have been done by a government led by Tony Blair. Cameron’s military intervention in Libya, for which he was a much greater cheerleader than Obama, was just as much a disaster as Blair’s intervention in Iraq. But Cameron knew what had happened in Iraq, so there is less excuse for him.

Cameron’s idea of a “Big Society”, where local communities take over responsibilities from government, never amounted to much. As one critic said “most people I know do not want to run their local library or school, they just want the service to work”.

Cameron’s problem with the European Union was not so much that he was a Eurosceptic, but that, like many Britons, he just did not find the EU interesting at all. Like his compatriots, he thought the EU was something external to the UK, with which the UK did business on an arm’s length basis, rather than something of which the UK was a full member.

He did not invest time in it, and thought that problems could simply be sorted out by a chat with Angela Merkel, as if the other countries would always do what she told them.  Merkel for her part thought Cameron was “apt to make his mind up too quickly”, and ask for more than he could ever hope to get. She preferred to start her negotiations with modest demands and build on them.

In 2007, as a newly elected leader of his Party, he had promised a referendum on the Lisbon Treaty, but by the time he came into office it was too late for that, because the Treaty had been already ratified. But his failure to keep that so called “promise” left him with problems with his backbenchers for the rest of his career.

The same backbenchers were also, of course, angry with him because he had not won the election in 2011, and instead had to opt for a Coalition with the Europhile Liberal Democrats.

The authors of this book think that Cameron’s position was so weak that he had no option, in 2013, but to promise an In/Out referendum. I disagree.  While there was a real threat from UKIP, I do not believe his party would have brought him down over this issue. There is no evidence that Cameron gave any serious thought to what ought to be done if the people voted for “Leave”.

When he came to fight the Referendum itself, he chose to appeal only to people’s pockets, and not to their hearts, or to their sense of self respect.

He could have pointed out that in 1914, Britain went to war, not for its Empire, but for Europe…to defend Belgian neutrality.

He could have reminded his fellow citizen that Britons went to war in 1939, also for Europe, to defend Poland.

He did not do so.

Such an appeal to patriotism could have countered the xenophobia that occupied the emotional space,  that his materialistic campaign left unoccupied.

But then it emerges in this book that Cameron himself sincerely believed in having a cap on immigration, including from Poland, the country Britain went to war to defend in 1939.

In 2010, he had said “Kick us out in 5 years, if we don’t deliver a cap on immigration”. A well informed Party Leader would have known, even then, that such a promise was incompatible with his country’s obligations as an EU member!