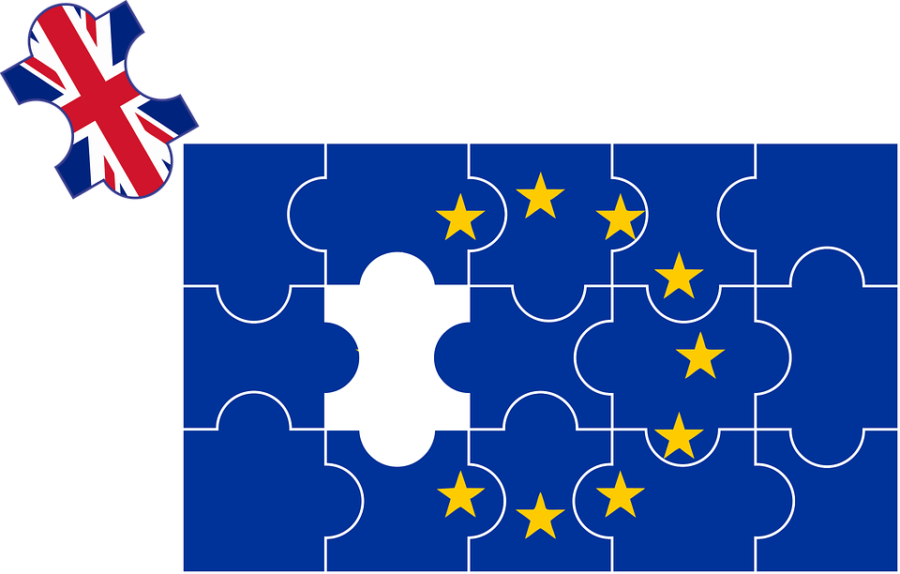 CAN THE BREXIT IMPASSE BE RESOLVED?

This week I am speaking in the Sciences Po University in Paris at the invitation of the Dean, Enrico Letta, a former Italian Prime Minister .

A member of the Scottish Government, Fiona Hyslop will also speak and we will be discussing the dilemmas posed by Brexit with a number of academics and their students.

Later this week, I will attend the Ideas Lab, organized by the Centre for European Policy Studies (CEPS),  in Brussels. I am a member of the board of CEPS.

This meeting will consider the possibility of the trade war between China and the US going global, integrating climate and trade policies, and the vision for the EU for the next 5 years. Brexit, as such, is not on the agenda.

Interesting ideas on resolving the Brexit impasse have been put forward by Andrew Duff, a former MEP, and by Professor Kenneth Armstrong of Cambridge University.

Andrew Duff suggests a series of detailed amendments to the Political Declaration that would bring the UK closer to the EU in some respects.

Professor Armstrong suggests a new protocol that would give greater legal force to the Political Declaration.

His core idea is that there would be that a set of criteria be negotiated, as to how and when the backstop might  be implemented, or be modified or replaced.

Procedurally, his proposal would de dramatize and postpone the issue. But it would not solve it.

It remains to be seen how it could avoid a hard border,  either in Ireland or on the Irish Sea, if, at the end of the day, the UK insists on pursuing an independent trade policy.

It is also unclear whether a majority could be obtained in the House of Commons for any of this.

Until that is clearer, it is hard to say whether the EU has a credible interlocutor in London with whom it can negotiate. The UK Parliament has yet to reconcile its desires, with the essential needs of the European Union. It has to accept the tradeoffs involved.

Professor Armstrong’s approach would avoid a No Deal crash out on 29 March.

I have no doubt that customs controls will have to be introduced by Ireland, as a continuing EU member, in the event of a No Deal crash out.

I feel that public opinion has not been prepared for that legal reality.

Being in the EU has been very advantageous for Ireland in every way, especially in attracting investment and jobs.

So Ireland must implement EU law. The EU is a system of rules, and if its rules are not respected, it ceases to exist. 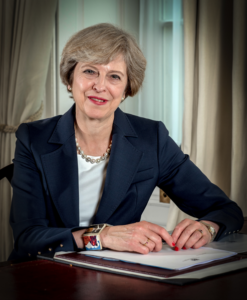 The UK Prime Minister, Mrs May, writes today that to have a second Referendum in the UK on Brexit would be “a gross betrayal of democracy”.

If she believes that, she does not understand democracy very well.

Totalitarian or dictatorial regimes, who do not hold regular elections, do not a have an inbuilt mechanism for changing their minds. This makes them brittle. Democracy, in contrast, is flexible.

There may be practical arguments against holding a second Referendum on Brexit, at this stage.

“What alternative to Brexit would be offered to voters, and by whom would it be offered….by the UK alone or by the UK and the EU?”

“ Might it be wiser to allow UK voters to actually experience Brexit in practice before asking them if they like it or not and want to change their minds?”

But for Theresa May to argue that reconsidering a referendum decision, by means of a second referendum,  is “ a betrayal of democracy” is just nonsensical. 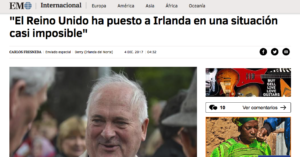 WHY I BELIEVE THE UK SHOULD STAY IN THE EU 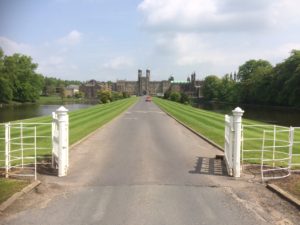 THE EU IS A VOLUNTARY UNION

The fact that the British voters are free to have a referendum, and free to decide to leave the
European Union shows that the European Union is a voluntary Union.
It is not an Empire, which something a country would not be free to leave.
Nor is it a Federal Union like the United States, which does not permit its member states to leave either.
The EU’s voluntary character is one of the reasons why a number of states are still looking to join the EU.

THE FIRST TIME IN 60 YEARS ANY COUNTRY HAS CONSIDERED LEAVING

The 23 rd of June 2016 will, however, be the first time in the EU’s 60 year history, that any state has contemplated leaving.
This is a serious matter not just for Britain, but for all the countries of the EU.
So British voters, acting as as citizen legislators on 23 June, ought to think of the risks, that a British decision to leave might create for neighbouring countries in the EU, like Ireland. Voters here in Lancashire need to think about the consequences for peace in Ireland of the deepening of the border in Ireland that would flow from a Brexit decision on 23 June.

They also should consider the risk that Britain deciding to leave would create a precedent that would weaken the bonds that hold the remaining 27 countries together. The Parliament in Westminster has passed to voters the responsibility for deciding if a possible breakup of the EU would really be good for Britain, and for Europe too. It is a big responsibility.

STABILITY IN EUROPE HAS ALWAYS BEEN IMPORTANT TO BRITAIN

Stability in Europe has been a long term British goal.
Edmund Burke in the 1790’s favoured a Commonwealth of Europe.
Castlereagh worked for a Concert of Europe, with regular Summit meetings like the EU now has, after the end of the Napoleonic Wars.
Winston Churchill, in 1930,advocated a United States of Europe.
These statesmen did not advocate these ideas out of some sort of dewy eyed sentimentalism. No, they had a hard headed appreciation of the fact that stability on the continent meant greater security for Britain, and they made their suggestions to achieve that end.

Now it is British voters, not British statesmen, who must decide what is best for Europe,

+ a Union with Britain on the inside, or
+ a fractured Union, which Britain has left of its own free will.

BREXIT COULD DOUBLE THE REGULATORY BURDEN

We hear much about EU Regulations and the burdens they impose. But even if Britain left the EU, it would still have regulations of its own on things like the environment, financial services and product safety.

In fact, to the extent that a Britain that had left the EU wanted to sell goods or services to Europe, it would have to comply with TWO sets of regulations,

Arguably the duplicated post Brexit regulatory burden on British business would be greater than the present one.

A UK/EU TRADE DEAL COULD TAKE YEARS TO NEGOTIATE

Some believe that the UK could leave the EU, and then quickly negotiate a free trade agreement which would allow British firms to go on selling in Ireland and the other EU countries.
I am sure an agreement of some kind could eventually be worked out, but it would not be quick.
Switzerland negotiated trade agreements with the EU, but that took 9 years.
Canada negotiated a Free Trade agreement too, but that took 7 years.
The British Agreement would be much more complicated than either of these, because it would involve new issues like financial services, and freedom of movement ,and access to health services, for example for Britons in Spain. It would have to cover agriculture.
Even with maximum goodwill from the European Commission, a post Brexit EU trade agreement with Britain would become prey to the domestic politics of the 27 remaining EU countries, each of whom would have their own axes to grind.
There would be a lot of uncertainty, over a long period.

STAY IN, AND MAKE EU BETTER

I believe British people should accept that entities like the EU, which provide a structure, within which the forces of globalisation, can be governed politically are essential, if the prosperity that flows from globalisation is to be shared fairly.
Rather than leave, Britons should consider how they can make the EU better than it is, and there is plenty of scope for that.

Speech by John Bruton, former Taoiseach of Ireland, in Stonyhurst College, near Clitheroe in
Lancashire on Sunday 29 May at 5pm

OVERCONFIDENCE CAN LEAD TO POLITICAL, AS WELL AS FINANCIAL, MISTAKES

In UK, UK membership in the EU

A ballooning current account (or balance of payments) deficit, and an explosion in household borrowing.

These were the two signs of impending difficulty, that Ireland ignored between 2005 and 2008.

In 2008, Irish public opinion was so optimistic that it felt it could afford to reject an EU Treaty in a referendum, notwithstanding the disproportionate benefits Ireland got from EU membership. It reversed this decision in a subsequent referendum in 2009.

The UK is exhibiting some of the same symptoms of overconfidence at the moment.

The UK current account or balance of payments deficit for the last quarter of 2015 was 7% of GDP – the deepest deficit since 1955.

The UK is spending more abroad than it is earning there.

It is making up the difference with borrowing. A country that is borrowing more abroad must be particularly sensitive to the volatile opinions of foreigners.

UK households now owe almost £1.5 trillion overall, up 4% on a year ago. The vast majority of that debt is in the form of mortgages, where lending growth has been climbing steadily since the start of 2015. Much of that has been driven by the buy-to-let sector.

And now the UK is about to have a referendum on whether it should leave the EU altogether. And in the UK case, unlike Ireland, the government has said firmly that there will be no second referendum

UK voters should be wary of overconfidence. They should remember what happened in Ireland.