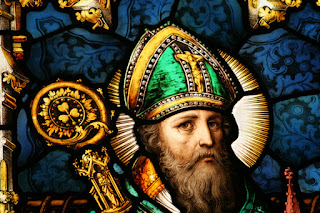 I am  deeply honoured to be invited to  address  this  dinner, an honour that has also been  given to three other  former Taoisigh of Ireland, Garret FitzGerald, Albert Reynolds and  Bertie Ahern.
Others  who have spoken at this dinner include President Harry Truman, Senator Robert Kennedy, Senator Hubert Humphrey , Senator Eugene McCarthy, Senator Bob Casey, and Governors Bill Scranton and Martin O Malley.
The life of St Patrick has very important lessons for us in the  21st century
St Patrick was above all a Christian man of faith.  His faith was so deep that he was prepared to go back among a people who had previously enslaved him to share that faith, that good news, with them.  He did not do it for material wealth. He did it because of belief in a cause, a reality, greater than himself, greater  than all  humankind.  I believe that faith, and  a consequential willingness to work  for a cause greater  than ourselves is something we need to  rediscover, and foster, in this  generation.
St Patrick was born Welsh or British, and a  citizen of  a Roman  Empire, a Roman Empire that  encompassed  most of western Europe and the Near East.  But by the time he died, the Roman Empire had fallen, Rome itself had been taken, and Europe did not rediscover  its unity until modern times.
Two reflections on that.
Irish people should remember where St Patrick came from. If, as is likely he had brothers and sisters,  their distant descendants are  probably living today in Wales, the South west or the  North west of England. This reminds us of how much our two islands, Ireland and Britain,  in the North Atlantic have in common, of the good things we have given to one  another, and continue to do to this day.
Perhaps even more topically, in these  anxious economic times, we  should reflect of what  happened to the economy of Northern  Europe during St Patricks life time.
When he was  born there was considerable prosperity, a common currency system  for all of Europe based on silver coinage minted in the name of the Roman Empire.  This  currency, this means of  exchange, enabled citizens of Rome, including  St Patrick’s family to trade  across long distances,  to buy and sell good, and to   enjoy a  good standard of living.
By the time St Patrick died, this system had collapsed.
Because it was cut off from  Rome, silver was no longer  available in  Britain to provide  currency. Anyway, there was no political authority strong enough to stand behind an alternative currency, and ,as a result, scholars now  believe that living standards fell dramatically, to perhaps a  quarter of their previous level, and stayed at that level for centuries.  All that happened during the life time of one person.
This shows the fragility of all economic systems, how dependent they are on political conditions,  and how change can be sudden and destructive, as  well as slow and benign.
While St Patrick  had his mind on  other, arguably much more important things, we  can learn a lot for today from what happened  to the economy during his life.
We need to  be careful to value and maintain  a  political system that  encourages trade,  sustains credit,  and  keeps all of us open to  the needs and aspirations of people far away from us, and very different from us, as different  as the Irish who captured and  enslaved  St Patrick as a boy must have seemed to him.
In a word, economics and finance are important, but they are dependent on a robust, believable and  strong political system, something that existed when St Patrick  was born, but had disappeared by the  time he had died.
Extract from remarks of John Bruton, former Taoiseach, at the  dinner of the Friendly Sons of St Patrick in Scranton Pennsylvania on 17  March  2011 at  8.30pm EST
Print Entry

The Future OF THE EUROPEAN UNION…………an Irish perspective, the podcast

This is a critical week for Ireland and for Europe.