I wish all visitors to this site a very happy 2011.
2010 has been a worrying year for anyone living in Ireland, as I do. While Ireland is still, by any historical or comparative standard, a wealthy country, its confidence has been shaken.
Many individuals face catastrophic debt situations. Others are comfortably off, with savings, assets and falling living costs, but they worry about possible knock on effects on their savings of the vulnerable financial situation of the banks and of the Government .
In this, my first posting of 2011, I am not going to talk about the economy at all, but about some good books I read during 2010,

“The Force of Destiny” by Christopher Duggan (Penguin) is a history of Italy since 1796. When Italy was united in the mid 19th century, its new rulers tended to divorce the claims of the nation, as a sort of abstract ideal, from the claims of the actual people who lived in Italy. Provincial privileges were lost and the Italian state did not win the full loyalty of all the people for many years. This contributed to the growth of aggressive nationalism as a means of mobilizing support (imperialist adventures in Libya and Ethiopia) .
A prominent Italian nationalist wrote in 1911 “War, and war alone, arouses the highest the highest moral virtues” , a delusion unfortunately shared by some Irish nationalists of the same era. One eighth of the Libyan population died during the Italian war of conquest.
But the opposition of the Catholic church , because the unification of Italy meant the end of the Papal States, created a very different relationship between Catholicism and Italian nationalism to its relationship with Irish nationalism. The Pope declined to back the Italian war effort in 1917, condemning the useless slaughter. 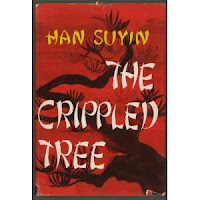 I visited China in 2010, and while there I read “The Crippled Tree” by Han Suyin (Panther books). This is an autobiography of a Belgian/ Chinese woman who lived through the revolutionary times in China in the first half of the twentieth century. It shows how desperate times were then and explains how the Chinese came to be so very suspicious of foreign intervention in their country.

Foremost among the books I enjoyed last year was David McCullagh’s “The Reluctant Taoiseach”,(Gill and Macmillan) a masterly biography of John A Costello. Costello had two parallel careers, one as politician and the other as a barrister. In 1948,he won the trust of a very diverse coalition of parties and pioneered inter party Government in Ireland, something that flows healthily from our good proportional electoral system.

I read “Inside the Kingdom” by Robert Lacey,( Arrow Books) in preparation for a recent visit to Saudi Arabia. It shows how the religious fundamentalist trend in that country is a consequence of compromises made by the monarchy to get support to overcome the occupation of the Grand Mosque in Mecca in 1979. The current King is easing this somewhat. The physical development of Saudi Arabia today is remarkable, as is the sophistication of of many of its prominent administrators and business people

I was intrigued by the title of “Power, Where is it?” by Donald J Savoie ( McGill University Press). He shows that, in Canada at least, media generated popular distrust of elected politicians has led to a lot of power in modern societies being hived off to expert bodies of all kinds, which are far less accountable to the people than politicians are. This artificial diffusion of power has not improved democracy at all.
The multi level systems of administration that are inherent in Federal systems of Government of the king found in Canada, Northern Ireland, and even the European Union, separate power from responsibility. This sometimes makes it impossible to identify who ,if anyone , bears responsibility for a decision.
Freedom of Information legislation may produce mounds of paper, but if it means that people try to avoid its requirements by taking important decisions in oral conversation, rather than on paper, then it defeats its own purpose.
There are so many safeguards, impact assessments, and consultation requirements built into the formal decision making procedures of many Governments, that the only way to get anything done quickly is to find a way to by pass them.
One person who has a unique capacity to cut through the procedures is the Prime Minister ,because he controls the Cabinet agenda, and can use it to fast track urgent decisions that would otherwise be bogged down by consultations . In modern systems, the Prime Minister is increasingly being called upon to do just this. So the ironic result is that consultation procedures designed to spread power around, have led to its being concentrated even more than before.
Print Entry

Are Two Days Meetings, Once a Quarter, Enough to Run Europe?