I have just finished reading “Sicily, a Short history from the Ancient Greeks to Cosa Nostra” by John Julius Norwich. 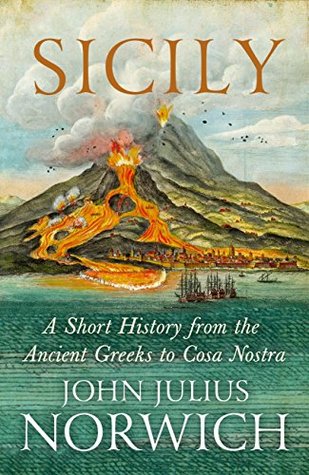 A former British diplomat, Lord Norwich has also written a comprehensive history of the Byzantine Empire, and other historical and travel works, concerning the peoples of the Mediterranean.

Sicily, like Ireland, is an offshore island of Europe, but its history has been more varied.

A thousand years ago, Sicily was much more prosperous than Ireland.

For over the two thousand years it was at the crossroads of the known world. It was a key to the control of the Mediterranean.

Not surprisingly it was fought over many times, by the Greeks, the Carthaginians, the Romans, the Arabs and the Normans. All left their mark on the architecture of the island.

The Greek influence is still predominant on the eastern side of Sicily, and the Arab in the west of the island. Greek was the predominant language in Sicily until the sixth century.

In more recent times, the Habsburg and Bourbon dynasties fought the control Sicily.

At times Sicily was part of one political unit with Naples, at others it was independent.

Garibaldi started his military campaign to unify Italy in Sicily, and the Americans started their invasion of Europe in Sicily in 1943, an event which led to the fall of Mussolini.

Al these stories are told in a colourful way by Lord Norwich, who brings the characters of the protagonists vividly to life.

Sicilians have suffered from their strategic location. Outsiders interfered so much, that Sicilians never developed a sound, predictable and efficient political and civic system of their own. This weakness left a space for the growth of organisations like the Mafia.

In some respects, Italy, as a whole, faces a similar challenge today of building a lean state, that can govern economically, without avoidable delays or fuss.