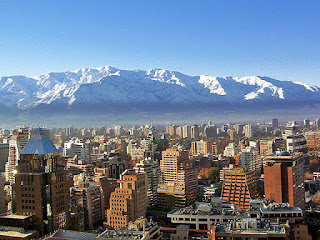 I visited Chile this week on behalf of the Irish international financial  services industry.
Santiago is, in my belief, one of the most beautiful cities in the world and is surrounded by the Andes.
The Chilean economy is doing very well and Chile is well on the road to becoming a developed  economy  with a high  standard of living. The economy grew by 6% last year. Literacy in Chile is 97% and unemployment is  7.6%.  The unemployment benefit system is privatised and benefits decline after a time. Companies are obliged to offer employees a share in profits ( a minimum of 30%).
The Chilean pension system is also privatized .
Chile’s economy is vulnerable in one respect. Its exports are heavily concentrated in one sector, copper, which amounts to almost 50% of all exports by value. But the Government has put a reserve fund aside to cope with circumstances in which copper exports declined in value.
Politics in Chile is very lively. There is currently a huge controversy about higher education.  Much of the  third level sector is run on a for profit basis, and fees are high. Student demonstrators want it to be free.
Ireland’s new Ambassador to Chile, James McIntyre is presenting his credentials to President Pineda this week. I also met the EU Ambassador, Jaime Perez Vidal
Print Entry

THE VICIOUS TRIANGLE OF DOUBT