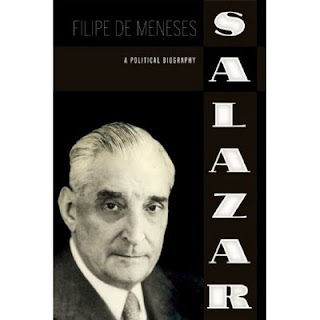 The author of this major work of European history is a senior lecturer in NUI Maynooth and a graduate of Trinity College, Dublin. De Meneses has drawn on Irish official archives and was assisted in preparing the book by the Irish Research Council for the Humanities.

Antonio de Oliveira Salazar governed Portugal from 1928,when he became Finance Minister at the age of 38, until his enforced retirement because of his entry into a coma in September 1968.

His background was academic, but his mentality was bureaucratic. Although a dictator, he scrupulously respected civil service protocols and never destroyed documents. He never married, was a strong Catholic, but had several affairs.

He came to power two years after a military coup had overthrown the chaotic, virtually bankrupt, Government of the Portuguese Republic. The military soon found that they did not have the skills to administer the country’s finances, so they turned to Salazar whose economic specialism was taxation. He quickly restored discipline to the national finances, balanced the budget, and enabled Portugal to weather the Great Depression better than most European countries. On that record, and with the use of great skills as a political infighter, Salazar became the indispensable and almost irremovable dictator of his country’s fortunes.

Unlike Franco, he was a hard worker, with little ego. He rarely travelled outside Lisbon. Unlike Hitler, Mussolini and Franco, he generally avoided the use of violence and never used demagogic methods. He distrusted paramilitary movements and dissolved those set up by supporters of his regime. He accumulated no wealth during his long period in office, and when he finally retired, he had no money even to pay for his nursing care. Unlike Franco, although he was sentimentally a monarchist, Salazar never restored the Portuguese monarchy.

This book gives a detailed survey of the major challenges Portugal faced during Salazar’s long reign.

An ally of Britain for centuries, Portugal remained technically neutral in the Second World War. It sent vital tungsten supplies for making explosives to Germany, while also ceding a base in the Azores to the Allies. It did not introduce rationing until 1944.

Portugal followed corporatist and protectionist economic policies until the 1950’s. It then turned to foreign investment to help raise the funds it needed to pay for the long war it fought until 1975 to keep its African colonies, after all other European colonial powers had left. Portugal argued that it could build a truly multiracial society where others failed.

It is good to see an historian based in an Irish university tackling a non Irish theme in such an authoritative way.

Book Review for “The Irish Independent” by John Bruton

The changing of the Guard