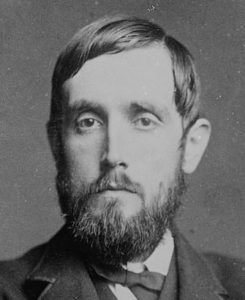 I spoke at a Seminar organised by the Reform Group in Wynn’s Hotel in Dublin on John Dillon MP , the last leader of the Irish Parliamentary Party (IPP), who was the father of James Dillon TD, who was leader of Fine Gael from 1959 to 1965. John Dillon died in 1927 having lost his seat in the 1918 General Election.

As well as Dillon, the seminar dealt with the DD Sheehan MP, who was a member of  The” All for Ireland”  League, set up by William O Brien MP, who was one of the few Irish Nationalists of the time to make a serious effort to understand the concerns of Ulster Unionists.

O Brien and Dillon, once close friends and allies, became rivals later in their careers, although both of them shared a belief in the Home Rule cause, and in exclusively constitutional and peaceful agitation to achieve their goals.

Grandchildren of both men were present at the seminar.

John Dillon was first elected to Parliament in 1880 and, from the outset, he pressed the cause of land reform, which, along with the enactment of Home Rule into law in September 1914, was to be a crowning achievement of the IPP.

In looking for rent reductions, and the eventual transfer of Irish land ownership from landlords to their tenants, Dillon had to contend with claims that this involved breaching contracts and property rights, which were then, and still are, regarded as central to the market economy.

Yet, if the land question had not been solved prior to Irish independence, the resultant struggles might have been so severe as to undermine the democratic character of the state, something that happened in some central European countries ,who gained independence in the early 1920’s without prior land reform.

Dillon, from the beginning, also believed in party discipline, and in the central control of candidate selection. In this, he clashed with Tim Healy MP and with William O Brien.

He believed, rightly, that discipline was vital if the Irish nationalist minority in the House of Commons was to achieve anything. In a parliamentary democracy, party discipline is of abiding value in achieving coherent outcomes, something Irish voters are inclined to forget nowadays.

COULD NORTH EAST ULSTER EVER HAVE BEEN COERCED INTO A UNITED IRELAND?

Like many Irish nationalists, then and since, Dillon had difficulty facing up to the reality that Ulster unionists could not, in practice, be coerced into a United Ireland.

Arguing publicly for something, that one knows in ones heart cannot be achieved in practice, is bad political leadership.

Successive Irish governments gave bad leadership on the question of how a united Ireland might come about, until the principle of consent was belatedly accepted in the 1970’s.

In Dillon’s case, he gave a speech in Belfast in March 1915 in which, on the question of a possible partition, to exclude part of Ulster from Home Rule, he said

“We will never agree to divide this nation”.

That remained the position of the IPP.

But Tim Healy claimed, in a letter to his brother Maurice in 1914, quoted in Frank Callanan’s excellent biography of Healy, that Dillon was privately of a more realistic opinion

Healy claimed Dillon was justifying this by saying

“How can we coerce Ulster with our record against coercion and that we cannot face civil war as a beginning to Home Rule”.

If Healy is to be believed, and he was no friend of Dillon, then Dillon was more realistic in private, than he was in public.

Healy, himself , thought the Ulster Unionists were only bluffing, and could be coerced. This is a nonsensical belief, but it is the unstated assumption of most modern day critics of the Home Rule  policy, including Sinn Fein and some historians.

At least in private,  John Dillon was a realist.

This gap between public rhetoric, and private belief, about the feasibility of enforcing a united Ireland, has proven very costly ever since.

This sort of self deluding rhetoric may become prevalent again in nationalist circles, if Theresa May persists in her “hard Brexit” policy.

COMMEMORATION ……WHAT CRITERIA SHOULD WE USE?

I believe official commemorations, of their nature, have to be selective.

So what criteria should guide our selection of the events to be singled out for commemoration in government ceremonies, postage stamps and public sculptures?

Commemorations cannot change the past.

All they can do is influence how we think about the future.

So government should select things to commemorate that will help us use historical event that help us manage foreseeable future challenges.

Thus I believe the focus of official commemorations on violent events, like the Howth gun running, the 1916 Rebellion and ambushes, is wrong.

These events have little of use to teach us about what we need to do in the future Ireland of the 21st century.

In contrast, the careers of men like John Dillon, his agitation, his compromises and his peaceful achievements, have much more to teach us ,about what is relevant to today and tomorrow.

WHO WILL PROTECT IRISH AND OTHER EU FIRMS DOING BUSINESS IN THE UK AGAINST DISCRIMINATION, AFTER BREXIT?