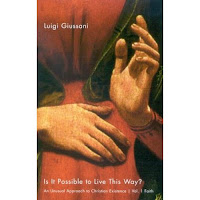 This book seeks to make sense of the lives we all have to live today. Does sacrifice make sense? What is the place of forgiveness? What does charity mean? Can we come to an understanding of these things in such a way as to enable us to place our own daily experiences and troubles in a context that gives hope and purpose to all we do?

As Monsignor Giussani puts it

He argues that sacrifice run not only against the grain of modern, gratification driven, consumer society. It also goes against our nature, he says. Yet we all know that sacrifice is necessary and inevitable, if life is to be passed on to another generation. Making that necessary sacrifice something which people willingly accept, is where religious belief can make all the difference.

As Monsignor Giussani puts it, sacrifice is

That “something else “, that does not wither like the autumn leaves ,is God.

A God that will help people accept sacrifice has to be One who is more than a distant abstraction, more than a default explanation for things that would otherwise be unexplainable.

No, the “something else” that makes sense of sacrifice, is a God who actually cares, a God who cares about not merely an abstraction like “mankind”, but who cares about each one of us individuals, who cared enough to send His only son to become a man and die a painful human death to atone for our sins. By becoming one of us, God tells us we are uniquely valuable.

Belief in such a God makes sense of essential incompleteness of everything we do. It opens us up to a new understanding of other people, of all faiths and none, if we accept that Christ died for each one of them too, whether they know it or not. It thus makes sense of love for others, of love that goes beyond some mere reciprocal relationship where one gives in order to receive, one which gives to others without hope of return , so that they, not the giver, can achieve their destiny. That is what Charity means.

Belief in such a God should make it impossible for us ever to see other people as mere objects. If God sent his only son to die for each person, how could we see anyone else as an object of any kind, as an object to be used for sexual gratification, as an object to be exploited for financial gain, or as an object to be sacrificed in a class war, a war of nations, or any other kind of war. The twentieth century was one in which human beings were treated as objects by tyrants, by sales people ,and also by each one of us individually whenever we treated another person without respect.

Forgiveness is one of the highest expressions of Charity, of giving without expectation of return, of giving for the sake of the other, not of oneself.

I think we have become a society whose mode of discourse, in the media and social networking has found many ‘inventive ways of taking offence, and far too few ways of expressing forgiveness.

Accountability has become an end in itself, and not what it should be , a necessary prelude to forgiveness. We need to create a new mode of public discourse, that puts forgiveness back at the heart of our culture. Surely a Christ who died on a cross for our sins would expect that of us .

Christ did not die for accountability, He died so that we may forgive and be forgiven.

You also see a lack of forgiveness, a lack of Charity, in the criminal justice system, especially in the United States since the beginning of the so called war on drugs, where mandatory and long sentences are imposed, and where people are left to rot in overcrowded gaols. In our modern crowd pleasing media, criminal trials are often presented primarily as a means of providing catharsis for victims, rather than, as methods of making a fair and objective assessment of the crime, and of what should be done with the criminal in the interests of society.

Remarks by John Bruton at the launch of the book

“Is it possible to live this way? An unusual Approach to Christian Existence “