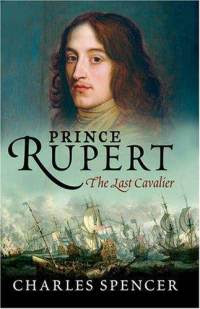 Another book with a German connection, which I greatly enjoyed recently, is “Prince Rupert, the last Cavalier” by Charles Spencer.  The author is the brother of the late Princess of Wales and, like Mary Kenny, he writes very well. The book is published by Phoenix Press.
Prince Rupert is best known as the leading general on the Kings side in the English Civil War of the  1640’s.
He was the Kings nephew, but had been brought up in Germany where his mother, the Kings sister, was married to the Elector Palatine. The Elector took the wrong side at the outset of the Thirty Years War and was dethroned by the Emperor. The family had to go into exile and had no employment. So Rupert became a soldier of fortune, initially in the Thirty Years War on anti Imperial side.
But when the English Civil War broke out he went to the aid of his uncle.  He commanded the Kings forces in most of the major battles of the war although he was only in his early 20s.
After the Kings forces were defeated on land, Rupert   led a royalist naval force, visited Kinsale during the Cromwellian wars here, was later in exile in France,  and even became  a friend of the German emperor.
He returned to England at the Restoration of the monarchy, had an interesting private life, and founded the Hudson Bay Company that opened up Canada to British traders.
This book is very enjoyable, and tells a story of an extraordinary life, and in the process it  lights up eighty  years of European history.
Print Entry