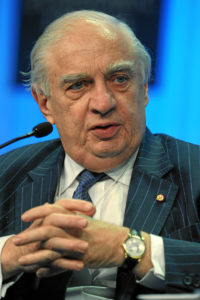 Peter Sutherland was a brave and highly competent Attorney General of Ireland.

He remained committed to this country and helped Irish causes through his exceptional generosity.

In 1984, he was appointed to the European Commission.

Peter was especially proud of his initiative in setting up the Erasmus Student Exchange programme, which has had a profound and beneficial effect on the lives of hundreds of thousands of young Europeans.

In the wake of the passage of the Single European Act, which allowed majority voting on measures needed to establish the EU Single Market. As Commissioner, he negotiated a new legislative procedure which allowed for this and enhanced the role of the European Parliament.

As Competition Commissioner, he was aggressive in pursuing cases of unfair state aid, an activity which sometimes brought him into conflict with the Commission President, Jacques Delors, with President Mitterand and with Mrs. Thatcher. He was unafraid and stood his ground, and vindicated the independence of the Commission.

His most remarkable achievement was, as Director General of the GATT in getting the agreement, at a meeting of 160 nations in Marrakesh in 1994, to the establishment of the WTO.

The WTO established supranational panels to arbitrate trade disputes. It built the foundation for the building of a rules-based international order, in international trade, which has contributed to a quarter century of global prosperity, because the rules protected the weak as well as the strong.

This concern to protect the weak inspired his work for asylum seekers and refugees in more recent times.

He was a man of faith, who showed, through his life, that faith and modernity can be reconciled. His talents brought him great success, but he was always conscious of his responsibility to help others and give back to society.