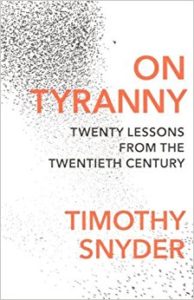 “On Tyranny, Twenty Lessons from the twentieth Century” by the historian Timothy Snyder.

Snyder is a specialist on the history of central and eastern Europe and has studied the origins and evolution of the genocidal policies of Hitler and Stalin. He is a Professor of History in Yale.

“On Tyranny “ is a short book and can be read in a few hours.

“ In politics, being deceived is no excuse”

from Leszek Kolokowski, a Polish philosopher .

The quotation, and Snyder’s book, are addressed to all citizens of advanced societies ,rather than just to politicians.

They voted for authoritarian options because they were tired of  taking responsibility.

Snyder fears a similar development is taking shape in the United States. This is as a result of a blocked political system, and the substitution of organised partisanship for compromise. Social media add to this blockage by allowing voters to isolate themselves from points of view other than those with which they already agree.

Snyder  argues that this creates the conditions in which tyrants could take power. While he overstates his case, he is right when he says

If voters accept lies without critical examination, just because the lie feels right, they are liable to elect the wrong politicians.

The more complex political issues become, the more likely it is that voters will give up on trying to make intelligent choices, and opt instead for emotionally satisfying simplifications. The Brexit vote in the UK is an example of this.

Fears of outsiders or distrust of elites are easier to whip up than is support for a complex, and costed, political programme. Ill defined threats like “terrorism” or “extremism” incline voters to accept restrictions on their liberty and their privacy. Voters come to believe that they have no choice, and no responsibility.  As Snyder puts it,

“The politics of inevitability is a self induced intellectual coma”.