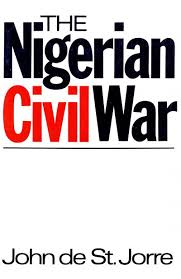 I greatly enjoyed reading “The Nigerian Civil War” by John de St Jorre, first published by Hodder and Stoughton in 1972, shortly after the war itself ended.

The Igbo, a tribe in SE Nigeria, thanks to good education and entrepreneurial spirit, tended to be disproportionately influential in post independence Nigeria. This led to resentment.

An army Coup d’ Etat in January 1966, in which members of the Igbo tribe took a prominent part, led to retaliatory killings of Igbos in other parts of Nigeria. This, in turn, led to an exodus of Igbos back to their ancestral lands in South Eastern Nigeria, in what was to become Biafra, and is now part of the Rivers State. These killings, mainly in Northern Nigeria, fed fears of a wider genocide against Igbos.

Even before Biafra formally seceded from Nigeria, the Nigerian Army was decentralised. Its commander in what was to become Biafra, Emeka Ojukwu, was thus free to make preparations for independence, while still technically in the Federal Nigerian army. This scope for autonomy of military commanders was also a factor in the Spanish and Irish Civil Wars.

At 2 am on the morning of 30 May 1967, Ojukwu declared Biafra to be independent of Nigeria.  Thanks to the fear of genocide, and to considerable international assistance (notably from France, Portugal and South Africa), Biafra survived militarily, until it suddenly collapsed in January 1970.

Thanks to the statesmanship of the Nigerian leader, General Yakubu Gowon, there was no genocide at the end of the war.

In contrast, leniency was shown and former supporters of Biafran secession were encouraged to take part in Nigerian political life. This is in marked contrast to the way in which the Spanish Civil War ended. Indeed the gradual realistion that, as the Federal army advanced into formerly Biafran territory, there was in fact no retaliation against former supporters of  Biafran secession, contributed to the collapse of secession.

In a sense, this Nigerian Civil War discouraged later attempts to re draw colonial boundaries on more “logical” tribal lines, elsewhere in Africa. An exception is the independence of Southern Sudan, which has not proven to be a great success.

It is difficult for an outsider to judge the legacy of the Civil War within Nigeria itself.  But this book tells a tragic story well.

Family, religion and ethnicity are still important loyalties rivalling loyalty to the state of Nigeria itself.

There are 350 different local languages.

The birth rate is higher in the Muslim north of the country and this could gradually change the balance of power within the country. Warfare with Boko Haram in the North displaced 2 million people in 2017.

In another book I read, “Nigeria, what everyone needs to know” by John Campbell and Matthew Page it is claimed

‘“politics is more important in Nigeria than in the US or Europe because there are few other alternatives for elite competition or enrichment”.

Members of the National Assembly are very well paid.

Democracy has become stronger in recent years. The 2015 national elections were seen as credible and fair.

Patronage is still a key to re election. But UNICEF estimates that as many as 40% of Nigerian children aged between 6 and 11 do not attend school any many educated Nigerians(including priests and doctors) tend to emigrate.

Finding a workable development model, that will keep talent at home and give opportunities to those currently excluded, is still a huge challenge for this large and powerful African country.

WHAT DOES THE GOOD FRIDAY AGREEMENT REALLY MEAN?