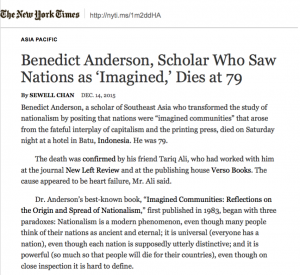 An ideology that does not have all the answers.
I  was in Asia when I read the New York Times obituary of Benedict Anderson posted above.
I confess I had never read any of his books but was struck by the huge contemporary relevance of the quotations from him in this  fascinating obituary.
Many of the disturbances in the world today are driven by the phenomenon Anderson spent his life analysing…..nationalism.
For example,
Nationalism frequently defines itself by the people it is AGAINST, rather than by the values it is FOR.
US Senator Cruz exemplified  this aspect of nationalism when ,in a recent speech, he called for “moral clarity” in US foreign policy, defining moral clarity as knowing how to identify America’s enemies!
Unfortunately nationalism often has to pick on violent events to provided cohesion for the “imagined community” that is the “nation”.
In Ireland, for example, we are embarking on a year of celebration of killings and death, in the Dublin rebellion of Dublin in Easter Week 1916,  and this rebellion, and the Proclamation that launched it, is being presented as the  “founding event” for the Irish nation.
This is historically inaccurate.
The Irish national identity was built,  much earlier, by peaceful agitation, by people like Daniel O Connell, Charles Stewart Parnell and others, much more than it was, by the killing and dying of the 1916 to 1923 period. In fact O Connell’s movement was arguably the first peaceful mass democratic movement in the world.
But I fear that will not be not the message that will be conveyed to Irish school children during 2016.
One interesting thing about nationalism is that is so un self critical.
It does not examine the assumptions it makes, whether about

Another thing to note is that nationalism is modern, and not an ancient, ideology.
It came about, as Benedict Anderson says, because  the other forces, that  previously sufficed to persuade people to cooperate such as a shared religious belief or a shared allegiance to a ruling dynasty, had lost their force . Nationalism has replaced Communism in Easter Europe since 1989.
Nationalism also uses simplifications of history, and mysticism, to  avoid asking difficult questions of itself.
This is evident in Japan, in its approach to China and to the legacy of its  war in China from 1936 to 1945.
Similar over simplifications and blindness to the other side are also present in the dispute between Israeli and Palestinian nationalisms.
These conflicting interpretations of history make it difficult for people, whose objective interests may actually largely coincide, to cooperate fruitfully with one another.
That is why I believe there should be an open debate about what nationalism really means.
The 150 traditional “nations” of the world ,who met in Paris on our global climate,  are all  of them far too small to cope on their own with the  challenges of global interdependence, global waste, and global environmental degradation. Nationalism does not have an answer to that problem.
While nationalism will always be with us, it needs to accompanied by other, more global, foci for loyalty and common action.
Print Entry

AN INTERESTING CRITIQUE….BUT HOW VIABLE IS THE ALTERNATIVE?