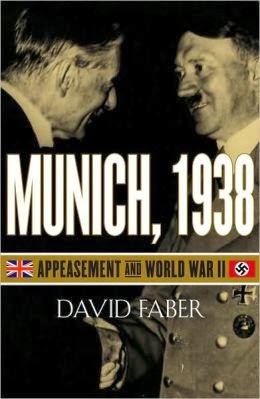 Diplomatic negotiations can only lead to a durable peace, if the negotiators have a genuine wish to leave the other side with something worthwhile. Hitler had no such intention at Munich, but Chamberlain did not see that.
“Munich 1938, Appeasement and World War II”, by David Faber, describes the negotiations that led to the dismemberment of Czechoslovakia in 1938.
It is true that Czechoslovakia was an “unstable unit”, created by the Versailles Treaty, by which 7.5 million Czechs held political sway over 3.5million Sudeten Germans, 2.5million Slovaks, 0.5million Hungarians, and 80,000 Poles.  The supposed principle of “national self determination” was bound to be difficult to apply in such a setting.
As the crisis developed in 1938,  and Hitler’s demands escalated, a number of things became clear. The French were not really willing to stand by their military guarantee to Czechoslovakia, unless forcefully backed up by the British. The British were tepid and unsure, and cultivated the illusion that Hitler was someone they could do business with.
The Czechs were prepared, as the pressure from their “friends” mounted, to concede almost any demand of their German speaking population, but the concessions would never be enough, because Hitler was determined to visibly humiliate the Czechs.
Even before Chamberlain met Hitler at Bad Godesburg, and later at Munich, the Czechs had already agreed that the Sudetenland could effectively secede from Czechoslovakia. The arguments between Chamberlain and Hitler were about timing.
It is interesting to observe that Czechoslovakia’s immediate neighbours, including Poland which would itself  fall victim to Hitler itself in 1939, were happy to cooperate with him in the dismemberment of Czechoslovakia.
In these circumstances, the French and the British did not have a strong logistical basis for any military defence of the Czechs. And they were in the same weak position when they eventually went to war over Poland in 1939.
In retrospect, it seems that Chamberlains biggest mistake was in February 1938, when he fobbed off an initiative by President Roosevelt to involve himself directly in the Central European situation.
As later transpired, it was only when US industrial power was deployed, along with the vast manpower resources of the Soviet Union, that Germany could be defeated.
Chamberlain was under the illusion that Hitler could be contained by British and French Empires acting on their own. Now it is easy to see  that he was wrong, but not so easy at the time.
He was also unable to see that he was not just dealing with a “normal” dictator in Adolf Hitler, but with a pathological gambler, to whom the conventional rules of human behaviour did not apply.
Print Entry

WHAT DOES BRITAIN WANT FROM AN EU RENEGOTIATION, AND WHAT TERMS WOULD IT GET IF IT LEFT?